The Soft Core of the Earth – Do We Still Need College?

It’s a question deserving of serious thought and an honest answer. In the face of ballooning debt for so many, coupled with stagnancy in numerous career fields, not to mention the competition from free educational outlets like Coursera and Khan Academy, prospective students – and their parents – are right to be skeptical.

Interestingly, those who most oppose higher education are also those who yearn for a mythologized past when things were “simpler” and conformity to social norms more common. Higher education has become a bogeyman, but that wasn’t always the case.

In fact, even before the boom in college attendance following WWII, there were great investments in high school. Most notably these were evidenced by the Cardinal Principles of Secondary Education in 1918, an attempt to systematize key outcomes of what was then the terminal point of education for many.

The objectives identified by the Commission on the Reorganization of Secondary Education included championing that the population: “be educated on the importance of good health”; possess a command of writing, reading and oral communication; become contributing and well-rounded family members with an appreciation for the arts and literature; be able to discover a meaningful career; prioritize an awareness and concern for their community, where “diversity and cooperation should be paramount”; appreciate the worthy use of free time where students acquire “the skills to enrich his/her body, mind, spirit and personality in his/her leisure”; develop an ethical character with an emphasis on personal responsibility. These are the hallmarks of a college education today. 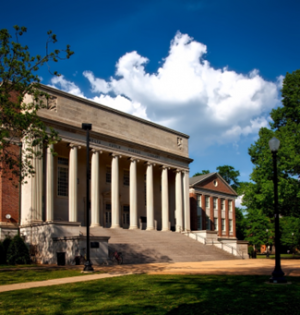 Are there better places to spend four (or five, or six…) years? (Image retrieved from https://www.pexels.com/photo/building-in-city-against-sky-256490/ and comes courtesy of Pixabay)

These goals were later crystallized in the National Defense Education Act of 1958 through the creation of a national standard for secondary education – the last time the country extended and confirmed its commitment to a free and meaningful education for all its citizens. We are amidst a 65-year holding pattern when it comes to guaranteeing we produce the best and brightest. Talk about stagnancy.

Though, it’s not like there weren’t initiatives proposed to evolve state-supported education beyond high school before.

One notable example at the national level was President Harry Truman’s report, “Higher Education for American Democracy.” Among other initiatives it called for was the establishment of a network of community colleges that would be free to all who sought entrance. Then came the counterculture, Vietnam protests, and other social uprisings, and a certain faction of American society soured on the value of college.

Since that time, federal funding has plummeted, and most state universities are now simply state-located, as the average financial contribution has fallen from around 75% of tuition in the 1970s to the teens in many states today. This means students pick up more of the tab, and thus take on ever-greater debt, leading to our current problem. More citizens in debt does not equate to a functioning society.

The political right has cast aspersions about what happens on college campuses for more than 50 years now, though 96% of those serving in Congress have at least one college degree. As much as Conservatives rail against what allegedly takes place on campuses, they still send their kids to college (and largely the most revered ones) at a rate higher than the national average. After all, only 37% of Americans have a bachelor’s degree. But that doesn’t make education any less important.

Nearly three-quarters of a century ago one Republican president, Dwight Eisenhower, called higher education “inescapably a responsibility of the federal government.” Ten years later, a future Republican president, Ronald Reagan, said that we should no longer “subsidize intellectual curiosity,” and that college should be strictly for workforce development. Apparently, Reagan didn’t see any need to have those cardinal principles of education be embraced at the highest level of thought and inquiry.

But it’s not like colleges and universities are beyond reproach. There are serious, existential crises on campuses across this country, everything from administrative bloat, a misguided arms race in infrastructure and athletics, an ill-advised affinity for prioritizing student amenities over academics, and a propensity for inflaming the worst indulgences of the political left.

So, where does this leave us today? Even those outside the ivory towers know that higher education is in trouble, something that has been exasperated by the pandemic. In many ways it simply exposed all the problems that had been festering under the surface for years, and certainly caused a lot of people, specifically students and parents, to reconsider whether college is truly worthwhile.

Over the coming decades we will see more colleges close their doors for good and fewer majors available to students. Those who still choose to go to college will be met with a changing landscape, where 4-year degrees will be deemphasized, and alternative certifications will take their place due to a greater focus on marketplace demands.

With this we will see less opportunities for people to have their beliefs and positions challenged, and fewer occasions to be exposed to something and someone different, vital components of the college experience.

And how will this affect society? Well, you don’t have to look too far to see the perils of misinformation and the absence of critical thinking these days. When we have a less-educated and less-compassionate society, then we will, eventually, no longer have a society.

Is college still worthwhile? You bet it is. That’s why we need to make it more accessible and more affordable to more people, not less so.