Out of This World – October’s Hunter’s Moon 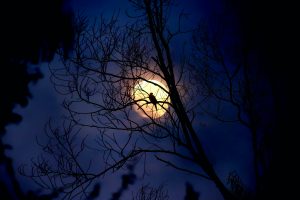 The Moon rises as the temperatures plunge.

This past month, the world saw a spectacular lunar display in the form of the Hunter’s Moon. The Hunter’s Moon is the first full moon that occurs after the Autumnal equinox, usually in October, marking the descent into colder and shorter days for the Northern hemisphere. The Moon appeared larger than the full moons of the summer and was also a more vivid orange color due to the light-scattering effects of the Earth’s atmosphere. Because of the heightened coloring, the Hunter’s Moon is sometimes referred to as a ‘Blood Moon’.

The Hunter’s Moon has long been integrated into traditional folklore and an area of interest for astronomers and spiritualists alike. Many spiritualists view the Hunter’s Moon as an invitation to activate our inner warrior before the descent into the darker days of the year. In astrology, full moons symbolize the energetic climax of the Moon’s journey through the zodiac and they can bring both mental clarity and heightened emotions. 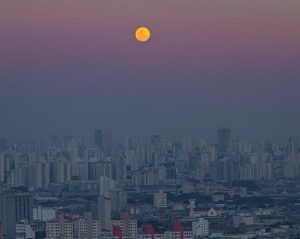 The Hunter’s Moon was given its name because it occurs during time of the year when Native American tribes harvested crops and gathered meat for the coming winter. The tribes would use the autumn moonlight to track and kill prey. One of the special characteristics of the Hunter’s Moon is that it usually rises later each successive night, meaning sunset and moonrise are close together. This prolonged amount of light was traditionally used by hunters and farmers to finish their work. 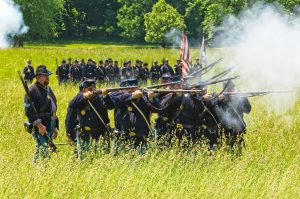 Period actors give a military display at the Feast of the Hunter’s Moon near Fort Ouiatenon.

Blood Moons also marked times of feasting and celebrating in both Native American and European cultures. Even today, people find ways to celebrate this lunar event, whether it be from capturing stunning photographs of the Moon near international landmarks or literal feasting. Each year at Fort Ouiatenon, a replica French military and trade post near Lafayette, Indiana, there is a weekend festival and historical reenactment known as the Feast of the Hunter’s Moon. Fort Ouiatenon was the first fortified European settlement in Indiana. The festival includes dressing in 18th Century garb, traditional period food, games, military drills and demonstrations, and various hands-on activities and performances such as Native American drumming.

It’s amazing to live in a world full of such beauty and wonder. Perhaps more incredible, though, is the human creativity given to such phenomena as the Hunter’s Moon. From inspiring beautiful photographs, giving people a reason to come together and celebrate history, or simply encouraging people to look up with awe, the full moon can give us a deep sense of connection to our planet and those we share it with.