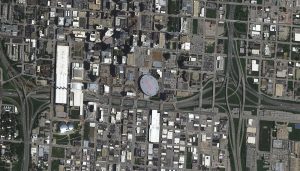 Last month we were in our nation’s capital (well at least close by it) with a look at their professional football stadium, and for the first 2022 edition of the Pléiades 1 – SPOT 6/7 Stadium of the Month we head to Kansas City for a look at the site of an early season matchup in Men’s NCAA Division I basketball, i.e. the T-Mobile Center.

About the Stadium: If you know anything about Kansas City, it is a major American city that straddles the border between Kansas and Missouri, with most of the population and downtown areas actually located on the Missouri side. T-Mobile Center is located in the Power and Light District about 1.5 miles (2.3 kilometers) east of the border in Missouri. Construction on the $198-million entertainment venue started on June 24, 2005 and was managed by M.A. Mortenson. T-Mobile Center was an integral part of the city’s effort to revitalize the downtown corridor in the 2000’s, opening its doors on October 10, 2007. The arena has a flexible seating structure that can vary from 17,297 seats for arena football to 19,252 seats for concerts. In 2020, T-Mobile purchased the naming rights to the arena, which was originally called the Sprint Center, through at least 2032 for $1.7 million a year – or $2.5 million a year if a professional sport team is secured as an anchor tenant.

Fun Factoids: (1) The T-Mobile Center was the site of an early season NCAA Men’s basketball matchup between the UTEP Miners and the U Kansas Jayhawks on December 7th. But to be fair, the reason we choose this arena is, well, it’s really cool looking with a glass panel outside; hopefully it looks just as good in the image samples!  (2) The T-Mobile Center has helped Kansas City secure more than $8 billion in revitalization investment in the downtown corridor. Since its opening, the venue has welcomed more than 12 million visitors to 100+ ticketed events per year.  (3) The glass exterior of the T-Mobile Center features 2,204 panes of glass that reflect light both day and night.  (4) While the arena does not have a permanent tenant from any of the major US sports, it is used nearly every week, for example featuring James Taylor, Keith Sweat and Elton John over the next few months.