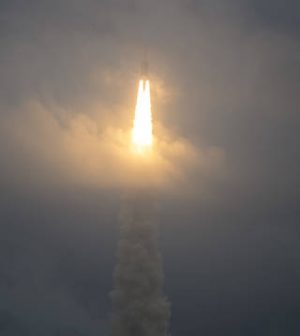 The Webb Space Telescope took off on Dec. 25th at 7:20 a.m. EST in a successful launch on an Ariane 5 rocket from Europe’s Spaceport in French Guiana. (Credit: NASA/Bill Ingalls)

The much anticipated James Webb Space Telescope successfully launched on December 25th at 7:20 a.m. EST from Europe’s Spaceport in French Guiana, South America. A holiday gift for many engineers as they watched years of problem solving, complicated logistics, and hard-won innovation culminate in a nail-biting launch on Christmas Day. Releasing the telescope into the Universe was a joint effort between NASA, the European Space Agency, and the Canadian Space Agency, and so was the collective sigh of relief. In six months, we’ll see the real fruits of their labor when the telescope is operational and looking back in time at the earliest galaxies in the Universe.

This topic is a fascinating one, but I can’t pretend to understand the science; I can barely follow the big picture jargon that turns my brain into a deflated balloon. According to people better educated on the subject, a team of scientists created a “time crystal.” It’s an exciting development that opens new opportunities in quantum physics. Beyond that, you should read the article, because I’m too busy trying to reinflate the balloon that is my brain.

Researchers at the Massachusetts Institute of Technology (MIT) are testing a new rover design for the Moon that hovers using the Moon’s natural charge. It might not be Dagobah, but it’s as close as we’re getting to becoming Luke Skywalker. The Moon and asteroids lack an atmosphere so they build up an electric field through their exposure to surrounding plasma and the Sun. If you have ever stuck your hand on a static electricity ball at a science museum or put on a staticky sweater and watched your hair stand on end, you’ve experienced a similar phenomenon. On the Moon, dust floats up to one-meter off the ground under similar conditions. The MIT researchers are looking at a flying-saucer type vehicle – I immediately imagine Marvin the Martian – that uses small ion beams to charge the vehicle and increase the natural surface charge. The rover can then glide across the surface with little regard for bumpy terrain. This does limit the size of the vehicle to two pounds, putting the brakes on a manned rover, but for small data collection this is an impressive low-energy alternative.