The Pléiades 1 – SPOT 6/7 Stadium of the Month – FedExField

In November we were in Europe to check out the historic site of a La Liga match, and for the December edition of the Pléiades 1 – SPOT 6/7 Stadium of the Month we head back to the States with a look at the site of a classic National Football League (NFL) matchup, FedExField in Washington, D.C. 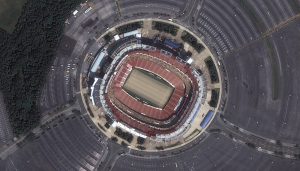 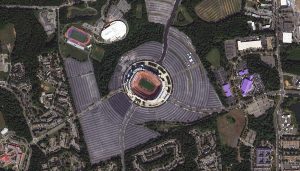 A 50-cm color image of FedExField in Greater Landover, MD, USA collected on August 10, 2021 by Pléiades 1B; and then a 1.5-m SPOT 6 image of the same stadium collected on October 3, 2021. These images have custom processing and color balancing applied by Apollo Mapping. PLEIADES © CNES 2021, Distribution Airbus DS. SPOT © Airbus DS 2021.

About the Stadium: While FedExField is home to the NFL’s Washington Football Team (WFT), the stadium is actually located about 9 miles (14 kilometers) east of the Capital in Greater Landover, Maryland – a common trend in the NFL as the Chicago Bears are likely to be moving to a suburb of Chicago in the coming years. Originally opened in 1997 as Jack Cooke Kent Stadium, the 82,000-seat FedExField replaced Robert F. Kennedy Memorial Stadium. The new stadium was spearheaded by then owner Jack Cooke Kent – who died before it opened – and was constructed by Clark Construction for a cost of approximately $250 million. FedEx purchased the naming rights to Jack Cooke Kent Stadium in 1996 for $205 million over 27 years. In 2021, the WFT replaced the grass at FedExField, installing a proprietary Bermuda grass surface that is also used by the Eagles, Chiefs and Titans in their home stadiums.

Fun Factoids: (1) At FedExField on December 12th there is a featured matchup between two of the best teams in the NFL, the WFT and the Dallas Cowboys – wait hold up, that is a total lie! In reality, I have wanted to feature the home stadium of the WFT before but using their old name, which was clear a racist troupe, was not acceptable in our newsletter; so it was finally time to feature them once they changed the name in the summer of 2020. (2) When the new Bermuda grass field was installed in 2021, it required removing some 5,000 cubic yards of soil as well as laying more than 2 miles of new irrigation piping. (3) At one time, FedExField had the largest seating capacity in the NFL at 91,704 during its peak, but multiple years of dismal on-field play (resulting in empty stands) saw the WFT reduce seating capacity at least 3 times in the past years. (4) FedExField provides the WFT with one of the worst home-field advantages in the NFL, perhaps due to its poor design with regards to fan noise amplification.