Last month we checked out the site of the first National Basketball Association (NBA) matchup for the 2021-2022 season, and for the November edition of the Pléiades 1 – SPOT 6/7 Stadium of the Month we travel across the pond to the premier division soccer (or football as you Europeans say!) league in Spain, La Liga, and to the site of a key game in Valencia, i.e. Mestalla Stadium.

About the Stadium: Mestalla Stadium is located in east-central Valencia about 2 miles (3 kilometers) from the Mediterranean Sea. Mestalla is the oldest stadium in Spain, opening on May 20, 1923 to host a friendly match between Valencia Club de Futbol – the team that still calls the stadium home – and Levante Unión Deportiva. Through its nearly 100 years of ‘life’, Mestalla has been renovated multiple times to expand its capacity and add more modern amenities, including in the mid-1950s, the 1970s and from 1997 to 2001. But still Mestalla lacks many of the amenities modern soccer stadiums boast, hence plans to build a new 75,000-seat stadium on the outskirts of town commenced in 2007; but were stopped shortly thereafter in 2009 due to lack of funding, and construction has yet to pick back up. 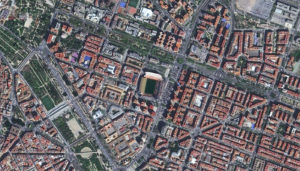 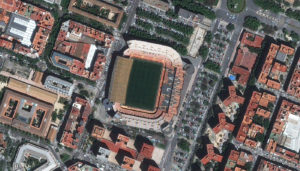 A 50-cm color image of Mestalla Stadium in Valencia, Spain collected on May 13, 2021 by Pléiades 1A; and then a 1.5-m SPOT 6 image of the same stadium collected on March 23, 2021. These images have custom processing and color balancing applied by Apollo Mapping. PLEIADES © CNES 2021, Distribution Airbus DS. SPOT © Airbus DS 2021.

Fun Factoids: (1) Mestalla is set to host a match between Valencia CF and Atlético de Madrid on November 7th – who were both sitting close to the top of the La Liga standings when this article topic was decided upon, but have since slipped to middle of the pack. In 48 matches between the two foes, Valencia holds a 13 – 16 – 19 record (wins – loses – draws). (2) Mestalla has been in essentially continuous use since opening in 1923 with three marked periods of inactivity: the first for the Spanish Civil War were it was used as a concentration camp for nearly two years; the second in 1957, where a deadly flood in Valencia damaged the stadium and play ceased for about two months; and the third being the COVID-19 pandemic. (3) When Mestalla was first built it was surrounded by fields so fans had to jump over the Mestalla canal to enter the stadium, hence that is where it took its name from.