Last month we checked out the site of tennis’ final Grand Slam of the year, and for the September edition of the Pléiades 1 – SPOT 6/7 Stadium of the Month we head to the site of the National Football League’s (NFL) first Monday night game, Allegiant Stadium in Las Vegas, Nevada. 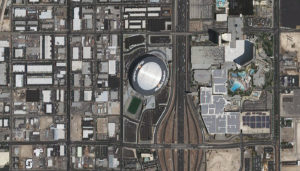 About the Stadium: Allegiant Stadium is located just to the west of Las Vegas’ Strip which is famous for its gaudy hotels, casinos, pools and nightclubs. The vision for Allegiant Stadium was born in 2016 when the Las Vegas Sands came together with UNLV’s college football team and Mark Davis, owner of the NFL’s Raiders, to build a new multi-use arena which the three teams had sought for many years. Shortly thereafter, construction broke ground on November 13, 2017 by HNTM and MANICA Architecture with the $1.9-billion stadium completed in just three years, hosting a Monday Night Football Game on September 21, 2020 between the Raiders and the New Orleans Saints. The naming rights to the black and silver clad stadium were sold to Allegiant Air in 2019 for a reported $20 to $25 million a year though few details of the agreement have ben released.

Fun Factoids: (1) Opening in 2020 during the height of the COVID crisis here in the United States, local NFL fans have yet to see their first home game in the new stadium. But that is set to change on September 13th when the first Monday Night game of the season will feature the Baltimore Ravens vs the Raiders. As of now, the game will be held in front of full stands at the stadium’s capacity of 65,000. (2) The Raiders entered the NFL in 1960 as the home team of Oakland, California; then they moved to Los Angeles in 1982 and back to Oakland in 1995. After multiple failed attempts at approval for a new stadium in Oakland, the NFL approved the Raider’s move to Las Vegas by a 31-1 vote, with 2020 as the inaugural season in their new Nevada home. (3) Allegiant Stadium is home to both the UNLV Running Rebels football team as well as the Raiders, with each of them playing on different surfaces. UNLV plays on artificial turf, while the Raiders play on a natural grass surface that is literally housed in a four-foot deep tray that is stored outside of the stadium on days when it’s not in use!