The Soft Core of the Earth – Two Weeks in MAGA Country

It was maybe early April 2021 when I was in a gun shop in my residence of [name redacted], a blue city in a purple state, when a mother and daughter came into the shop. The vaccinated numbers were slowly starting to rise – I had mine – but the air was still tenuous with ambiguity about the whole re-entering society thing. Well, in my experience most gun shops run red, and this one was no different. I’d been in there a few times during the pandemic, pre-vaccine, and the shop owner kept no secrets about his political leanings and his views on the virus. If you wore a mask in the store you were required to pull it down so his camera could pick up your full face, but he also followed that request with, “And I don’t care if you wear it or not. I don’t believe the hype.” This was his common refrain in his shop during the mask mandate in the state.

Anyhow, these two women – the daughter, a very attractive 27-year-old (it was her birthday that day) – were in to pick up mom’s gun, and momma and the owner started spitting conspiracy theories about the vaccine, Biden, and whatever nonsense of the Right that had come to be par for the course. They must’ve thought I was of the same ilk, though I said nothing to support their opinions. Instead, I just nodded my head and grinned, seemingly agreeing with them but in reality, thinking these people are perfect evidence to back of my claim that most people in this country are stupid. The daughter was clearly cut from the same cloth, though less vocal, but I was giving her a bit of a free pass because of her beauty. I could have stomached some Trump nonsense from her for a few dates for sure. I’m a straight male if you hadn’t guessed… I actually like speaking with people about divergent views, even if it’s hard to wrap my head around them sometimes. In this instance I was just taking in a single conversation, but I knew it was one that was being had by millions across the country. While I’d lived in deep red territory before, it was well before the Orange Dumpster Fire arrived in politics, so things seemed a little more civil and little less idiotic back then. The reality is that the controlled burn of conservatism got out of hand decades ago, and we are now witnessing the unstoppable wildfires of its promise now…

I love the West. Every summer I try to spend a few weeks jumping around to beautiful areas in the western states, going off grid and hiking, checking out new areas as much as possible. Having not spent much time in the panhandle of Idaho at all, and not in 15 years, I figured it was high time for me to make my return and do so for an extended period of time. In the end I spent two weeks in the north country, somewhere between Lake Pend Oreille and the Canadian Border. The area is beautiful. The temperatures were terrible, mostly, mid-to-high 90s because of the “heat dome” and the wildfires from the east, but the evenings and mornings were pleasant, so I could still get in a good hike and relax outside after dinner. Aside from that, it was either find the shade or hole up inside in the weak breeze from the window unit AC, but I only had that luxury for the last four nights of my trip (I changed locales, heading further north). Anyhow, this isn’t about the weather or the natural beauty of Idaho. It’s about Trump Country. The Land of the MAGA People.

You might not know how to look for many of them, as many Trumpsters can blend into middle-class and working-class America pretty easily. I have a few friends who are diehard Trump supporters, which amazes me, but our histories are long enough that I’m able to hold their transgressions at bay (for now). And it’s not certainly that I was an adamant Hillary or Biden supporter, though I clearly think both are better for the country than 45 was, is, or could be. However, charlatan, crook, and failure that he is, people love him, especially in the rural areas all over the United States. Why, though? 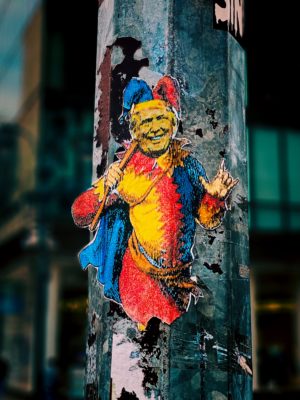 Exactly how I was hoping to be greeted at my vacation destination. This sign is at the entry point to Bonners Ferry, Idaho. (Image comes from Unsplash, courtesy of Jon Tyson)

In reality and on paper, he goes against everything those people purport to believe in and hold dear, and he ridicules the people who support him the most. It comes down to God, guns, and “freedom,” but the reality of the situation is that Trump is likely agnostic if not atheist, probably has never owned or fired a weapon in his life (draft dodger, too), and is as close to an authoritarian ruler (i.e., against freedom) as we’ve had in quite some time. All of this is nothing new, though. People take to his brashness, his vulgarity, his lack of intelligence (despite having an Ivy League degree), the perception of opulence (despite all his debt), his wastefulness (the American way), and his diet – KFC and Diet Coke. People see in him what they are – “fat, drunk, and stupid” (yes, I know he doesn’t drink, but it fits) – and what they wish they could be: in power so they can do whatever they want whenever they please. But why does that desire get more concentrated in the rural areas, especially in parts of the inland Northwest?

I admittedly have a libertarian streak myself, but it’s held in check by a stronger environmental ethic and a realization of a strong and reliable social program – there needs to be a floor that people can’t fall below, even if it’s their own doing and stupidity that we have to protect them from. So, I can sympathize with, or perhaps more accurately, understand the whims and desires of the MAGA People. I don’t believe in any god or religion, but I think you should be able to practice freely and openly – as long as it doesn’t impinge on others’ ability to practice, and more importantly, to not practice, religion. As I stated at the beginning of this ramble, I own guns. And you’re damn right I love freedom. As an adherent to existentialist philosophy, sometimes I think that’s the only thing we have: freedom of choice, even if the choices available to us are few and not necessarily good ones. Even in solitary confinement it’s still your decision how to respond… So, like I said, I get it. Kind of. Until I’m forced to interact with the worst and dumbest of them, something that is renewed in mind as I write this and listen to the special session in Congress on the January 6th insurrection. Those people, regardless of whether they acted violently or criminally, are the worst of the bunch. Just being there because you believe the election was not free and fair, or because you thought that Trump could somehow hold on to power, shows why you’re dangerous and should probably be marked as such.

In Northern Idaho they’ve lost touch with reality. But I guess that’s assuming a lot to say that they were connected to reality in the first place. And before you MAGA People get too fed up with me, the Left, particularly the “Progressive Left,” has as much potential, ability, and evidence to be stupid, reckless, anti-American, and dangerous as MAGA. But this is about these people, in this region, because right now, MAGA is way worse. Way worse… And yes, I met several who were sane and rational, so I am being hyperbolic and reductionist, but I will give the MAGAs this: they bought the Kool-Aid completely; they have few on-the-fencers or less-than-fully committed to the cause. Unfortunately, “the cause” comes at the peril of our nation, and for me, right now, at the peril of my ability to truly appreciate this beautiful country up here. It’s funny, because this close to the border of Canada – a country the MAGAs probably think of as full of sissies – the Maple Leaf (the Canadian flag) flies at equal height as the Stars and Stripes. I’m sure that’s akin these days to the “freedom fries” of post-9/11 for many in this region. The National Disaster is out-of-office (for now), but the cat is out of the bag. America will never be the same, and as we fight our culture wars, we let the important issues slip by the wayside: the environment and climate change. Trump didn’t start the fire, but he sure added a lot of fuel. Before it burns out, it will take everything we cherish with it.