In July we checked out the site of the opening ceremony for the 2020/2021 Tokyo Olympics, and for the August edition of the Pléiades 1 – SPOT 6/7 Stadium of the Month we head back to the United States with a look at the site of the next Men’s and Women’s tennis Grand Slam, Billie Jean King National Tennis Center in Queens, New York.

About the Stadium: Located on the northside of the Queens borough in New York City, Billie Jean National Tennis Center is actually a collection of multiple stadiums that surround 22 tennis courts as well as 12 outside courts. The largest of the indoor arenas is Arthur Ashe Stadium with a capacity of 23,771. Construction on Arthur Ashe was completed in 1997 by the engineering firm, WSP. In 2020, the United States Tennis Association (UTSA) announced a new 5-year agreement with Laykold to replace and maintain the court surfaces at Billie Jean National Tennis Center. Laykold courts have a variety of key differentiators according to the company website, with the major advantage being force reduction for the longevity of athletes’ bodies and joints. 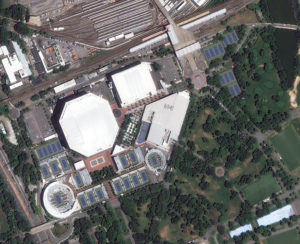 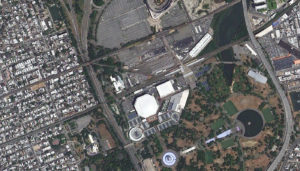 A 50-cm color image of the Billie Jean King National Tennis Center in Queens, New York collected on June 8, 2020 by Pléiades 1B; and then a 1.5-m SPOT 6 image of the same stadium collected on July 6, 2020. These images have custom processing and color balancing applied by Apollo Mapping. PLEIADES © CNES 2021, Distribution Airbus DS. SPOT © Airbus DS 2021.

Fun Factoids: (1) The 2021 US Open is set to start on August 30 and will run until September 12th. The 2020 US Open was obviously held during the middle of the COVID-19 pandemic so it featured a reduced field with notable starts, including Rafael Nadal, Roger Federer and Ashleigh Barty, not in attendance. At the time of drafting this article in mid July, no major withdraws had been announced for the 2021 US Open and 100% fan capacity is expected at the matches. (2) Billie Jean King National Tennis Center is named after the former top-ranked women, Billie Jean King, who played professional tennis from 1959 to 1990. She is renowned not only for her tennis prowess but also for her commitment to gender equality and social justice more broadly. (3) And then Arthur Ashe Stadium is named after Arthur Ashe who played professional men’s tennis from 1969 to 1980, becoming the first black player to win single’s titles at the US Open, the Australian Open and Wimbledon (three of the four tennis Grand Slams). (4) When Arthur Ashe Stadium was originally constructed it was designed with an open-roof; however, by 2013, it became apparent to the UTSA that the stadium required a roof to address both structural and operational issues. As the stadium was not designed to bear the weight of a retractable roof, some 1,700 self-supported beams were added to carry the weight of the two, 800-ton PTFE membrane panels which open in about 10 minutes. The roof alone was added at a cost of $150 million and was part of a $500 million renovation which was completed in 2016.