The Pléiades 1 – Pléiades Neo Stadium of the Month – National Stadium

Given the recent launches of Pléiades Neo 3 and Neo 4, we are pleased to announce an update to our regular stadium of the month series as the focus will shift a bit, offering only high-resolution imagery now from the Pléiades 1 – Pléiades Neo constellations. So, without further delay, here we go!

In January we checked out the site of a non-conference basketball matchup in the NCAA, and for the February edition of the Pléiades 1 – Pléiades Neo Stadium of the Month we travel to the other side of the world with a look at a Beijing 2022 Winter Olympic stadium, i.e. National Stadium. 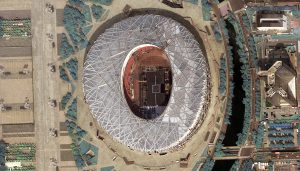 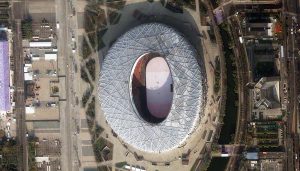 A 30-cm color image of National Stadium in Beijing, China collected on September 23, 2021 by Pléiades Neo 3; and then a 50-cm Pléiades 1A image of the same stadium collected on November 16, 2021. These images have custom processing and color balancing applied by Apollo Mapping. PLÉIADES © CNES 2022.

About the Stadium: National Stadium is located on Beijing’s Olympic Green some 4.5 miles (7.2 kilometers) north of the historic Palace Museum in the city’s north fourth ring. Designed by Swiss architects Jacques Herzog and Piere de Meuron, the Chinese spent $423 million on constructing the stadium – or about 1% of the total spent on preparations for the Beijing 2008 Summer Olympics, with ground breaking on December 24, 2003 and project completion in March 2008. National Stadium features 80,000 permanent seats with the ability to add 11,000 more temporary seats. At the center of the stadium is a track featuring a Mondotrack FTX surface which is designed to protect athletes and the environment.

Fun Factoids: (1) In 2008, National Stadium hosted the Opening and Closing ceremonies as well as a series of athletic competitions; and for the 2022 Winter Olympics, the stadium will again host the Opening and Closing ceremonies but it will not host any athletic events. (2) Affectionally referred to as the Bird’s Nest, National Stadium is widely revered as one of the world’s most iconic 21st Century buildings, winning the coveted Lubetkin prize in 2009. (3) China is reported to have spent $42 billion on the 2008 Summer Olympics, while the 2022 Winter Olympics have an estimated total cost of only $3.9 billion. (4) After the close of the Summer Olympics and Paralympics, it took nearly a year for National Stadium to host its next sporting event which was the Supercoppa Italiana match between Internazionale and Lazio on August 8, 2009.