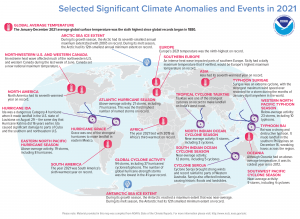 The NOAA extreme weather events map for the year 2021 shows mixed polar ice extents with the Antarctic Sea seeing near-average ‘growth season coverage’ but then the 12th smallest on record during its ‘minimum coverage season’. And while Africa had its third warmest year on record, Oceania experienced its coldest year since 2012.