Out of This World – Cool Tech: A Year in Review

Happy New Year everyone! We’re super excited to see what the new year has in store, especially in the world of emerging technologies. 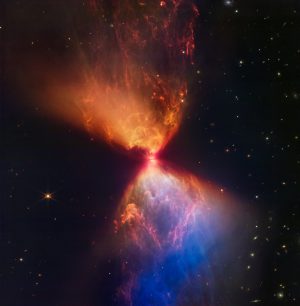 Webb captured the birth of a star, called a protostar, in the pinched area of dust and gas. (Credit: NASA, ESA, CSA, STScI)

2022 saw some amazing technological advances, and we want to honor those as we look ahead! We’ve rounded up our top 3 favorites to share with you. We hope you’re as excited as we are to see what’s to come!

The most incredible technological development that came out of 2022 was, without doubt, the James Webb Telescope. The largest optical telescope in space, Webb uses infrared technology to explore hitherto unknown places in the universe.

Although the telescope was technically launched in 2021, its first image was released to the public on July 11, 2022. Since then, we’ve seen a multitude of truly spectacular images from the telescope. It’s shown us the clearest images to date of Neptune’s’ rings, a sparkling revisitation of the Pillars of Creation, the cosmic hourglass created by the birth of a star, rare red spiral galaxies, and much more. We’re eagerly anticipating Webb’s next images, as well as what NASA has up its’ sleeve next.

For decades, scientists have been pursuing the phenomenon known as net energy gain, essentially, more energy out than in. In the wee hours of December 5th, scientists at the National Ignition Facility (NIF) in California completed the seemingly impossible task. To do so, they used nuclear fusion reactions, the same reactions that power our Sun and the stars. The NIF researchers created energy gain by focusing 2.05 megajoules of laser light onto a capsule of fusion fuel made of deuterium and tritium. The ensuing reaction sparked an explosion of 3.15 megajoules – similar power to an explosion of 3 sticks of dynamite. Fusion energy holds the tantalizing possibility of carbon-free energy, without the radioactive problems presented by fission-driven nuclear power. While this technology is currently in its infancy, it presents intriguing hope for clean energy. Hopefully now that NIF has proven it can be accomplished, fusion energy will receive more credibility as well as funding.

It’s no secret that aviation makes a large contribution to climate change. Aviation wants to change that standard, so they created Alice, a zero-emissions electric commuter plane. On September 27, 2022, the Alice prototype took its first flight. Though the plane was only in the air for 8 minutes, it climbed 3,500 feet and landed safely. The aircraft uses approximately 21,500 small Tesla-style battery cells to power MagniX electric motors. In addition to being sustainable, Eviation intends Alice planes to have significantly reduced operating costs (compared to fuel using aircrafts), and to be much quieter in the air, thereby reducing air noise pollution. While much work is needed before Alice can be used widely for commercial use, it’s a radical change in aerospace technology and so we’re optimistic it will help catalyze a new era of sustainable aviation.

With 2022 seeing so many incredible new technologies, who knows what 2023 has in store?! We’re awed by and grateful for the scientists and researchers who dedicate their lives to the pursuit of finding new and better ways to reduce humanity’s impact on the planet. It’s people like them who will help protect and restore our planet by guiding us toward sustainable solutions.