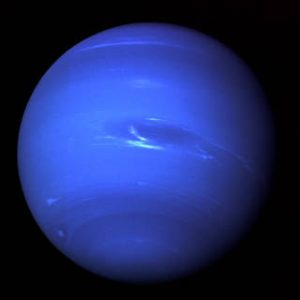 On September 21st, NASA reveled new images of Neptune. These remarkable images capture ethereal views of the planet, including the clearest views of its rings in more than 30 years.

Neptune was first noted by none other than the famous astronomer Galileo Galilei in his journals during December 1612. Galileo observed Neptune through his handmade telescope, noting it first as a ‘star’. German astronomer Johann Gottfried Galle was the first to identify Neptune as a planet instead of a star at the Berlin Observatory in 1846.

In 1989, NASA’s Voyager 2 was the first spacecraft to observe Neptune, capturing images of the planet itself as well as the planet’s largest moon, Triton. The images of Neptune that were taken by Voyager 2 can be viewed here.

The new images of Neptune captured by the James Webb Space Telescope are beautiful in their crystalline clarity – capturing not only Neptune’s rings and 7 of the 14 known moons, but also the planet’s fainter dust bands.

The Webb Telescope used its Near Infrared Camera (NIRCam) to capture the planet in infrared imagery for the first time, causing the planet to appear red in the images instead of it’s typical, distinctive aqua color. The NIRCam covers the infrared wavelength range from 0.6 to 5 microns. The telescope is also equipped with coronagraphs, instruments that work by blocking the light of brighter objects, making it possible to take pictures of very faint structures around a central bright body. The coronagraphs are what allowed Webb to capture the rings and moons of Neptune with such crispness in the new photos. 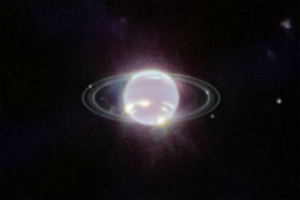 The new images of Neptune also capture its largest moon, Triton, just like Voyager 2. Triton orbits Neptune in an unusual backward (retrograde) orbit, leading astronomers to speculate that this moon was originally a Kuiper Belt object that was eventually captured by Neptune’s gravitational pull. In the coming year, NASA plans to perform additional Webb studies of both Neptune and Triton.

The Webb Telescope is capturing images that continue to captivate us with their beauty as well as intrigue us with the wealth of information we can glean from them. How spectacular is it to live in an era where we have the ability to explore and see new depths of the Universe around us? We here at Apollo Mapping can’t wait to see what comes next from the James Webb Telescope.

Share This Article
This entry was posted in Uncategorized and tagged James Webb, Neptune, Out of This World, The Geospatial Times Bookmark the permalink.