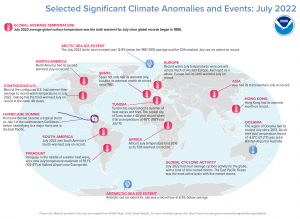 The NOAA extreme weather events map for July 2022 shows the 12th-smallest and the smallest (ever) recorded ice extents in the Artic and Antarctic Seas (respectively). It is also the second month in a row with a smallest-extent record set over Antarctica. North America experienced its second-warmest July ever while Asia had its third warmest on record followed by South America with its fourth warmest.