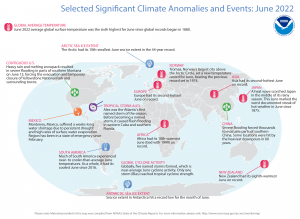 The NOAA extreme weather events map for June 2022 shows the 10th-smallest and the smallest (ever) recorded ice extents in the Artic and Antarctic Seas (respectively) for the month. South America experienced its coolest June since 2016 while Asia and Europe had their 2nd warmest June’s on record.