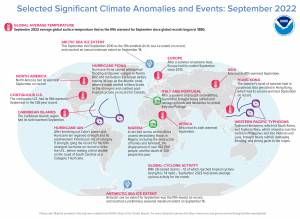 The NOAA extreme weather map for September 2022 shows below average sea ice extents in both the Arctic and Antarctic Seas. August also saw two hurricanes sweep through; the first, Hurricane Fionia, which made landfall in Nova Scotia as the strongest and costliest post-tropical cyclone on record in Canada. The second, Hurricane Ian, which tied for the fifth-strongest hurricane on record to strike the United States. (Credit: NOAA’s State of the Climate Reports)