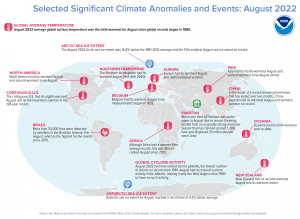 The NOAA extreme weather map for August 2022 shows below average sea ice extents in both the Arctic and Antarctic Seas. Spain had its warmest August on record, as well as its warmest month since 1961. August also saw the birth of Hurricane Bonnie, which swept the East Pacific. (Credit: NOAA’s State of the Climate Reports)