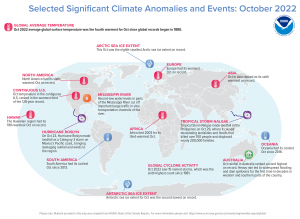 The NOAA extreme weather map for October 2022 shows below average sea ice extents in both the Arctic and Antarctic Seas. October saw two tropical storms sweep through. The first, Hurricane Roslyn, made landfall as a Category 3 storm on Mexico’s Pacific coast. The second, Tropical Storm Nalgae, made landfall in the Philippines, where it caused devastating landslides and floods that killed more than 100 people and displaced nearly 200,00 families. (Image Credit: NOAA’s State of the Climate Reports)