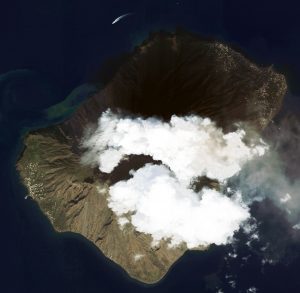 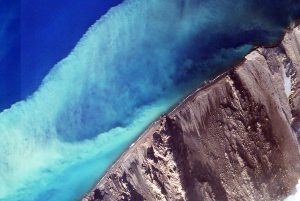 Happy New Year from the Apollo Mapping team! As you step into the New Year, grab a warm, tasty drink and take a walk in the chilly (but hopefully sunny!) outdoors for a work break. Before you head out, take a moment to check out these 30-centimeter (cm) Pléiades Neo 4 images collected over Stromboli Island, Italy on October 11, 2022. These images were captured during the eruption of Mount Stromboli, situated on the Italian island of Stromboli, which is located off Sicily’s northern coast in the Tyrrhenian Sea.

Stromboli is one of four active volcanoes in Italy, and well known due to its incessant volcanic activity. It has been in a nearly constant state of mild eruption for the last 2,000 years. The volcano regularly emits incandescent nighttime explosions that are visible from both the island and the surrounding sea, resulting in the island’s nickname, “Lighthouse of the Mediterranean.” Although Stromboli exudes constant volcanic activity, the October 11 eruption was the first major one since 2019.

These Pléiades Neo 4 images showcase the October 11th eruption. The first image offers a top-down, low-resolution view of the explosion. The second image offers a zoomed in look at the northwest side of the island, where lava is flowing into the ocean. Lava flowing into the water causes the sea to boil and create amazing tidal patterns, which can easily be seen in this image.

The island of Stromboli has a population between 400 and 850 people. Despite the small local population, the island is an incredibly popular tourist destination, receiving thousands of visitors each year. Tourists can take guided hiking tours up the volcano to a viewpoint near its top where they can witness the regular eruptions. The hike itself takes between 5 and 7-hours roundtrip.

While we love to add movement to our work break, todays break won’t be nearly as strenuous as a hike up Stromboli!

Have a great rest of your workday! 😊