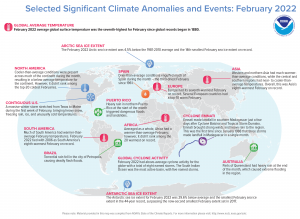 The NOAA extreme weather events map for February 2022 shows receding global ice sheets with the smallest coverage in the Antarctic Sea ever recorded in the month and the 14th smallest on record for the Arctic Sea. And while Australia and North America had a cooler than average month, the rest of the world saw above-average heat with the 8th warmest February in Asia and South America, and 7th warmest in Europe.