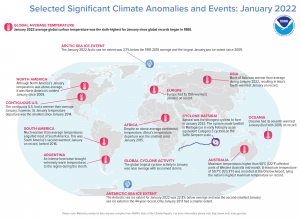 The NOAA extreme weather events map for January 2022 shows mixed polar conditions with the Arctic Sea seeing its largest January ice extent since 2009, while in the Antarctic, the sea ice extent was the second-smallest for the month – only 2017 had less ice coverage. And then in North America we saw the coldest January since 2009, while South America saw its second warmest January – behind only 2016.