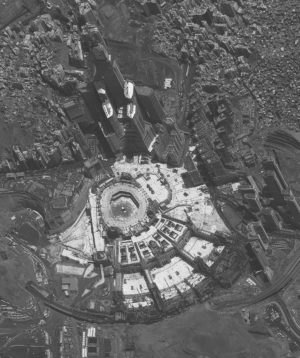 Can you believe it’s already September? Time flies when you love your job and the people around you! As much as you might love (or hate) your job, everyone needs a work break; so, head outside for a quick walk around the block but before you do take a quick peek at the 50-cm panchromatic WorldView-1 (WV1) image featured here! This WV1 image was collected over the annual Hajj – which is a pilgrimage to Masjid al Haram (or the Grand Mosque) in Mecca, Saudi Arabia – at approximately 14:12 local time on August 15, 2019. We have featured the Hajj in previous newsletters, including in 2012, 2016 and 2018, but this is the first time we have featured a high off-nadir (or side-looking) image from WV1. According to official statistics some 2.489 million pilgrims attended the 2019 Hajj – making it one of the world’s largest annual mass movements of humans.