The Soft Core of the Earth – The Sunshine State

Sometimes names are ironic. Sometimes names are assigned to promote an image that is not true, but they are assigned as a marketing gimmick or to sway people’s opinions about an individual, group, place or thing. Everyone has heard of the big guy named, “Tiny.” I just drove through Richmond, Indiana and it promotes itself as “A Great American City.” I find that hard to believe. At least they didn’t say “The Great American City” – that would be an egregious overstep. I recommend, for the purposes of accuracy, they change it to “An American City.” That is a verifiably true claim. Type in “the best…” into your favorite search engine (Ask Jeeves?) plus whatever you want to know what the best of something is and you’ll get all sorts of claims. Subjectivity is an American art. Maybe it’s a human art. But man, do people love their opinions. A line from one of my favorite songs (but certainly not the “best”) is, “I keep my distance, and my opinions, to myself.” Wouldn’t that be great if all people did? Hmm. That seems like my opinion… Never-you-mind, this is my bully pulpit to spew hyperbolic nonsense and make unsubstantiated claims… 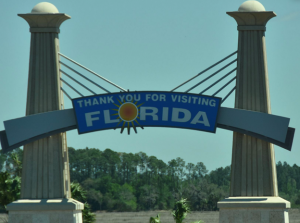 It was nice to see this. Hopefully I won’t return anytime soon – if not ever again.

One of the states that’s in the running for “Most god-awful” (a quite prestigious award) is the Hanging Chad itself, Florida (sometimes referred to as America’s Dong). It claims itself to be the “Sunshine State,” and we’ll get into why this is a hoax right away. So, I assume they crafted this nickname for itself because of the number of sunny days it has during a year; depending on which farcical and opinionated website you go to, it appears they claim 235-240 sunny days a year. However, numerous states, including California and Colorado, claim more sunny days per year; the latter claiming 300. Is this something to quibble over? Of course. That’s all this column is about: quibbling. But there are other concerns associated with the designation of “sunshine,” and that’s where the crux of my focus will be.

Merriam-Webster defines “sunshine” as “the sun’s light or direct rays; the warmth and light given by the sun’s rays; a spot or surface on which the sun’s light shines.” The second part of the definition, and where I’ll spend the bulk of my time, is, “someone or something that radiates warmth, cheer and/or happiness.” Florida does not do this.

Recently I made the poor decision to drive down to Florida (this would’ve been a poor decision in a non-pandemic year as well). Not only was it a lengthy drive from my stomping grounds, but I had a short weekend ahead of me, so the time spent driving to the time on the ground was a little too close to being equal (assuming you take sleep time out of the mix). I’d been to Florida many times but hadn’t been in a decade. While it’s true I’ve been to the state a few times and enjoyed myself, trips to Tallahassee, Daytona Beach and Panama City come to mind, but as one could infer from those cities, the focus was on partying and booze, and those visits came in my “younger years.” Now that I’m more “refined,” I’ve chosen to do my drinking closer to home – or at least in cooler states (not necessarily temperature-wise, but that too, preferably). But drivetime to in-the-state time aside, the heat and humidity is brutal down there (apparently year-round), you have to drive everywhere – nothing walkable about the state, everything is concrete – very little greenspace, but of the greenspace that does exist, it’s mostly reserved for critters (no argument with that) and thus you cannot bring dogs into the nature preserves; those you can are devoid of shade; so, where does a faithful dog owner take their sidekick pup to have an enjoyable adventure outdoors in the shade? Add to that the fact that people are everywhere, and they’re of the “slightly off” variety (yes, that’s an intentional overgeneralization of Floridians; I think it’s mostly accurate). Florida gets its jabs for a reason; sometimes stereotypes are appropriate.

There have been a few times in my life when I’ve arrived somewhere and almost immediately felt it was a bad idea – unfortunately this includes a “permanent” move to SoCal many moons ago (what a life lesson that was), and that was my feeling this time. I think being in a car for a long time will do this to me if I don’t go right into a fun activity, but all I wanted to do upon arrival was to take the pooch for a walk, grab something to eat (which was a failure in its own right because I ended up at Subway out of desperation and tiredness), and have a few beers to wind it down. My plans for the weekend were for the following two evenings, so I had some time to kill, but I didn’t want to waste it, and I certainly didn’t want to just sit around inside my rental, as nice as it was. Well, I searched far and wide and tried to do enjoyable activities, but after spending 90 minutes in the baking sun at a wildlife refuge, 30+ minutes walking down an overcrowded dog beach, and what seemed like several hours on highways trying to get to these places, I was striking out. Add to that the fact that I got on a toll road and somehow didn’t get the tracking ticket which resulted in me having to pay the maximum fine to get off that highway, I was left frustrated. To say the least.

The reason I went down to Florida was to see a singer-songwriter play at an acquaintance’s palatial backyard (side note: yes, this breaks most conventional pandemic best practices, but Florida doesn’t care; also, there were only about 20 people, all properly spaced out and outdoors, so not much worse that what happens in any urban park, I imagine). I hadn’t seen a concert since March 11th, and I see a lot of them, so I was chomping at the bit. Sure, there are some spots in my place of residence that have started hosting music, and I’ve thought about going, but most are indoors, and they’re all in boozy environments, so you know people get loose with the guidelines in those types of atmospheres. Plus, most of the musicians playing around my way aren’t on the top of my “must see” list – and the guy in Florida was. So, bad decisions there I went… Now you know… I avoided everyone, stayed masked, sat on the perimeter, retreated to my car at any extended break so as to decrease the likelihood of engaging with fools in foolish situations, and left while the last note was still resonating in the air. So, I was good even if it wasn’t the best decision to begin with. But this little diatribe isn’t about that, it’s about how much Florida sucks.

I did eat some good food – braised cauliflower tacos on a bed of guacamole with a chunky pineapple sauce will be forever embedded in my tastebuds, but aside from the music, nothing else about the trip makes me want to return; nothing else about the trip was enjoyable. It was perhaps quite fitting that on my way out of the state it rained incessantly. “Sunshine state” my ass. I didn’t leave with a sunny disposition, that’s for sure, and I have no plans to give the state another chance in the future.