The Soft Core of the Earth – The King of Absurdity

I often wonder what it would be like to descend into madness. I’m not much of a movie watcher, but a couple months ago I watched “Joker” with Joaquin Phoenix playing the title role. That movie was panned for spinning mental illness in a negative light, and maybe so; and while I don’t aspire to lose my marbles and go homicidal as the “Joker” did, I found that I did appreciate some of the aspects of absurdity that were portrayed in the movie. For some reason I find comfort in the surreal and the absurd. There are, of course, numerous other examples I could give from popular culture, but my aim right now is to try and unpack why that it is for me, and to crown myself the “King of Absurdity” in doing so.

I guess I’ve always had a few screws loose ever since I was a kid. I sought out trouble and didn’t learn lessons quickly (if at all). And you’re right: no, that doesn’t make a person or a situation absurd per se. But I think the rules I often had no issue with breaking were absurd – at least to me, hence why I broke them. Obviously, upon reflection those rules were there for a good reason, and many of the stupid things I did as a kid I wouldn’t do again given the opportunity (or at least I’d be smarter about it if I did in terms of not getting caught – or at least choosing my battles). My main motivation was always to have fun, but coming from a strictly run household that didn’t cotton to excessive goofiness, rule-breaking, and general mischief, I often felt trapped. So, as I got older, I did more and more stupid stuff, often lied about it, always got caught, and spent an awful lot of time being grounded. Then, when I got out of the house and into college, stupid stuff spilled over. But the stupid stuff became tinged with absurdity when I added drugs and alcohol into the mix, and certainly when I allowed others to egg me on into doing more stupid stuff (and, of course, I always egged them on in a similar manner). Some people might write this off as normal coming-of-age behavior, and I’m sure that was part of it, but I still tested the boundaries of bad/good decisions, truth/lies, reality/surreality, and wisdom/absurdity. 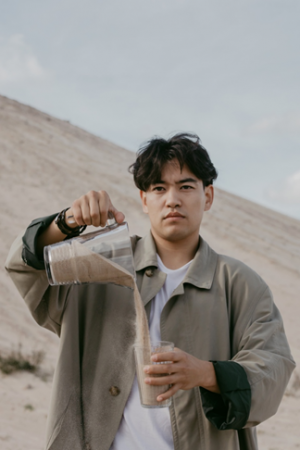 Whenever I’m thirsty, I reach for a tall, hot glass of sand. Image retrieved from https://www.pexels.com/search/absurd/ and comes courtesy of cottonbro.

Now that I’m older, I feel my embrace of the absurd is even stronger, but my actions on engaging in absurd behaviors are more calculated. I also must feel others out in this arena these days, as nobody wants to interact with a middle-aged guy who’s off his rocker more often than not. So, I’ve cultivated some friends who are open to absurdity and typically willing to indulge my nature. Here’s an expedient example: this gal I’ve been dating came over one night, and after “hanging out” for a while, we decided it was time to get ready for bed. The thing is she left most of her stuff in the car, some of which she supposedly needed before bed. It was cold and rainy out, a little after midnight, and she was trying to get me to go and get it. I didn’t want to for all of those reasons I just listed. Well, I started proposing things she could do in exchange for me going to get her crap out of the car. For example, I suggested that if she let me put her in the drier for 5 minutes, the freezer for 2 minutes, or allowed me to pour salt in one nostril and pepper in the other, I would go get her stuff out of the car. I suggested that she could stand in the shower, and I would throw a bucket of freezing cold water onto her, or perhaps she could let me draw on her face with a Sharpie. None of this did she find acceptable, but fortunately she found it at least a little amusing. Unfortunately, I didn’t get to do any of it. I went out to the car in my boxers in the rain and got her stuff. But at least I got to release a little absurd energy.

More often than not, I come up with absurd things in my head while alone, with only the dog to share them with. I’m not sure what she understands, but sometimes she does look at me weirdly. I wonder if part of my brain just didn’t mature the way it should have. There are numerous reasons why this might be possible. When I was 5, I fell down the stairs of my attic, hitting my head on every step along the way. I had to spend several days in the hospital with a severe concussion, and I couldn’t stop vomiting. I’m sure that did some permanent damage. Interestingly, my mom was also up in the attic at that time, as was an adult neighbor. My mom was getting something for him, and I was playing around, foolishly. He was near the top of the steps, closest to me, and when I started to fall, he just kind of laughed and made no effort to grab me or come offer help once I landed in a pile and bawling on the floor. He must’ve thought it was a joke. Or he just didn’t care. Or he thought it absurd, I don’t know. Needless to say, my parents didn’t talk to that neighbor much after that incident. I also had a penchant for eating raw bacon when I was a kid. Gross, I know. I’ve heard that can lead to some brain diseases. So, like I said, I probably damaged my brain in more ways than one and thus now greatly appreciate the absurd. Or maybe it’s not related, who knows…

The most perplexing thing about my affinity for the absurd these days is what I’ve come to find absurd. Sure, there are the things that most would find absurd, like wearing a bikini during a snowstorm or arguing with a child about the existence of “monsters.” And there are some that more people should find absurd, like organized religion. But these days, systems and social mores often seem absurd to me, especially anything bureaucratic in nature. But that’s a different kind of absurd; that’s the “why is it like that and everyone seems okay with it” kind of absurd. I’m more talking about absurdity of the unquestioned, the abstract, or the beautiful/ugly – anything rooted in irony and humor.

And if I’m being honest, now that I’ve become such a cynic, a recluse, a curmudgeon, I find absurdity in the tasks I have to do every day as a way of making my way in the world, especially when it comes to work. More and more often, I find the duties of my job to be absurd. In part because my organization keeps having resources and personnel stripped from it, and the outcomes of our widget-making seem to show less and less substantive results. Yes, I’m being vague, but just think of it along these lines: if you poured a bunch of time and effort into producing something, and after having done so the product was inferior – through no fault of your own – you’d probably be a little disillusioned, right? You know, if nothing that you do matters at your job, why do it? Why try? Trust me, I don’t want to think this way, it’s just devolved to this way of thinking – and I’m not the only one, and it’s not only my organization. Think of it a little bit as a cross between Peter from “Office Space” and D-Fens from “Falling Down.” So, a zenned-out guy who doesn’t give a flying f#^k meets a stressed-out guy who doesn’t give a flying f#^k. I’m somewhere in the middle recognizing the absurdity of it all. Pretty picture?

I don’t even have any desire to see things less absurdly. To be clear, I do have a great desire to do less work, so I’m making this my notice that I’m starting phased retirement 15 years early. Every six months I’ll do one less thing until eventually I’ll be doing nothing yet still be getting paid. Wouldn’t that be absurd? ☺