The Soft Core of the Earth – The Big Easy

“When the Big Easy calls, you gotta accept the charges.” A friend of mine once told me that more than 20 years ago, when I was in my heyday of frequenting New Orleans at least once a year – or more if I could make it happen. Truth be told, I went down there for the debauchery; why else would you go to NOLA? Sure, great food, great arts, architecture and culture, and of course, great music. Everything moves a little slower, and everything is accepted a little more down there; it truly is a city that has something for everyone. And everyone belongs. That’s unusual. It’s a hip city, that’s for sure, and while it is embedded in the heart of the Deep South, with a history that is ambiguous as much as it is fraught with darkness, most of my experiences there have been more frictionless when it comes to mixing with different people: races, creeds, colors, religions, genders, sexual orientations, it doesn’t matter – more than anywhere else I’ve ever been, people seem to get along just fine, for the most part. Of course, most of my time in the early years was confined to the French Quarter, then eventually Frenchmen Street and the Garden District, but then I made my way out into the 9th Ward and elsewhere, and maybe I’m just naïve or aloof, but I always felt comfortable – and mostly safe. There is no doubt crime and violence there, just as with any larger city, but NOLA has a culture that perhaps overrides those concerns. I’ve been to and lived in other areas of the Deep South and that kind of culture is not present elsewhere, that’s for sure. And while I don’t get down to the bayou as much as I once did or wish I still did, I do look forward to my journeys back. I consider myself a Rockies or Northwest guy, but I think I could make an exception for the right opportunity in New Orleans. I can’t stand the humidity, so that’s the last place I should be, but I might be able to make it work. Somehow.

But I’m not looking to move there, and this little ditty isn’t about my desire to do so. It is about my impending next trip down to the Dirty South. As you might’ve guessed, I am going down for debauchery, and it promises to be a good time – and likely quite draining. I’m not young any longer, and certainly not as resilient, but I’ll give it the ole’ college try for 36 hours or so; I just hope I make it through alive. If I don’t, I doubt it will be because someone put me on ice and cut out my kidneys (or any of the other ridiculous tropes that proliferate what could happen to someone in NOLA), but because my body will simply have had enough of the type of punishment that comes from the kind of drinking that takes place in the kind of city that New Orleans is. That or the coronavirus will get me. Let’s take a detour there first.

Just two days ago (late February), I took a quick trip to the Northeast, and on my flight back the plane was less than 25% full. I got to my home airport and nobody was there – it was eerily vacant. Well, I immediately chalked it up to people’s worries about the virus, but then I thought to myself that Americans are pretty aloof and unconcerned with things when it gets in the way of their daily lives and fun, but just the same, they (we) also get into panics over small things as well. If folks were truly just being careful and avoiding congested situations where travelers from all over the world would be squeezed together like cattle, it really does make sense. I’d be a liar if I said I didn’t consider canceling my trip. But I’d already paid for it so I didn’t want to take the hit. Plus, I was looking forward to it. I guess we’re all dying to have a good time. Hence my upcoming trip to the Big Easy. 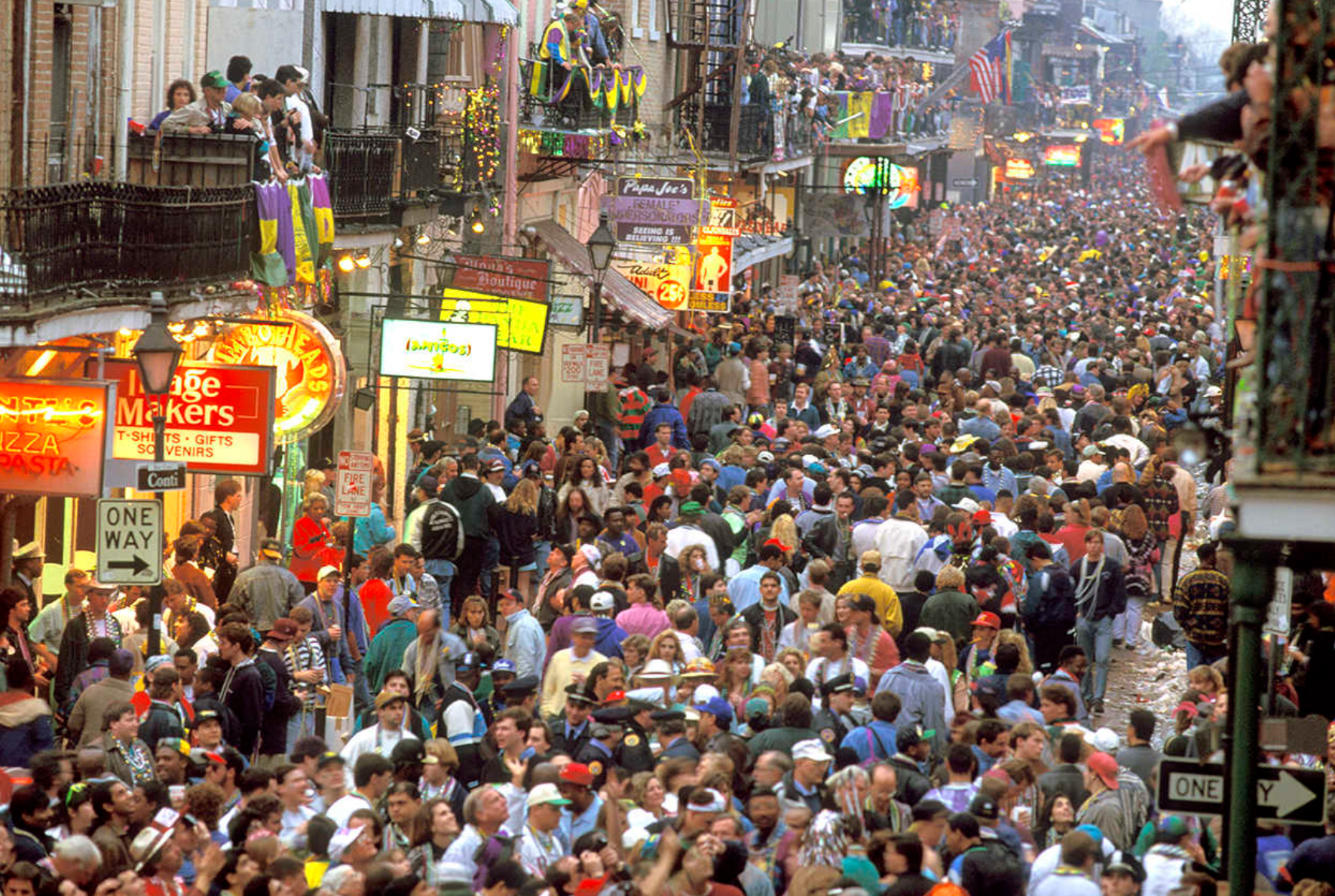 “I’m on my way to New Orleans this morning, leaving out of Nashville, Tennessee; they’re always having a good time down on the bayou, Lord, them Delta women think the world of me” – Ramblin’ Man by the Allman Brothers

Who knows what the situation with the virus will be in six weeks when I’m scheduled to depart? This might be a “eat-your-fare” situation if it spreads further and becomes more of a threat to the health of the general public. I’m curious, though, could I consume enough booze to fight it off? Homer Simpson did once say that “alcohol [was] the cause of and solution to all life’s problems”; does that apply to a pandemic threat? If I skipped that trip due to concerns and common sense, that wouldn’t guarantee me from not getting COVID-19 though. Wouldn’t that be something if by skipping the trip I actually get it in my hometown over that weekend? Oh, the irony if so… But really, what are you supposed to do if the end of the world is at your door? Party, that’s what. If you’re on an airplane and it’s going down, you hook up with whoever is sitting next to you, right? Just like Rock Master Scott sang, “The roof is on fire, we don’t need no water let the #$&*@ burn!”

Maybe we should start with my first trip to NOLA back in February of 1998. Three friends and I went down in a 2-door Geo Metro, probably late afternoon on the Friday before Mardi Gras. We didn’t have much money, and no place to stay, but that’s the sort of thing you do when you’re 20, I guess. We got down there around 10pm, I imagine, and partied for several hours. At the end of the night one of my friends and I slept in the car; the other two slept on the cement outside of it, behind a bush. The next night none of us slept as we went to a rave until 6am – then proceeded to go home immediately after. Well, our car broke down somewhere near Osceola, Arkansas, maybe 8-9 hours from home. We four derelicts got picked up by a state trooper who dropped us off at a nearby gas station where there just happened to be a Greyhound busing going our way. I wasn’t even considering staying around with my buddy’s car – we had no way of getting it home anyways – so I bought his ticket to convince him to go; far as I know it’s still sitting on the highway. That remaining 9 hours took 15 and 2 transfers, but we made it. On the surface, it doesn’t sound like that great of a trip, but I was itching to go back the next year – for 8 years in a row I made it down for Mardi Gras weekend, only to be curbed by Katrina. I tried to get people to go that year as well, but to no avail. I’ve never made it back for that festival since, but I’ve been for New Year’s, St. Patty’s Day, and everything else in between. I imagine I’ve been roughly 15 times to “the city that care forgot.”

It took a while before I could get down there and have proper living quarters (mostly I spent the night on more affluent friend’s hotel floors), but that never seemed to hamper my good times. I think when you’re young and resilient you can tolerate just about anything, especially when it’s fun and you’re wearing a whiskey blanket the whole weekend, but now that I’m old, I haven’t got the same caliber of fuel in the tank. In reality, I’m a one-and-done’r, but it’s hard to fly somewhere for just one night, though I do often operate by the adage, “If you can’t get it done in one night, you didn’t do it right.” I think that’s just a coverup for the fact that I can’t handle much more. One time I went to a friend’s bachelor party in Reno/Lake Tahoe for 5 nights – I was trying to change my flight back early after 2, but with no luck. Would’ve cost too much. Sometimes I bite off more than I can chew, I guess. I paid with my liver instead…

So, we might be fast approaching the end of the world, or maybe by the time this goes to press the virus will be a non-factor. Either way, I’m going to NOLA, and I’m expecting to be tested by the beast of consumption and the bars that never close. Some of my friends have stronger constitutions when it comes to the act of partying – they simply haven’t slowed down since college – so, I imagine I’ll be shamed into stepping up and giving my all. If this is the last you hear from me, it’s probably because I drowned in booze. But if I’m able to rise to the challenge, I’ll try to report back on what happened, or at least what I remember or think happened.

One last story about a past trip to the Big Easy: it was a beautiful February day in 2000 and I’d had more than my fair share of beers, hand grenades and hurricanes, and was in need of some relief. I have no idea why I didn’t just walk into a bar, maybe they were all too crowded and I was too lazy – and too arrogant – so I decided to find a nice side street to relieve myself. I posted two friends on the 1-way street facing oncoming traffic, so I assumed I was safe. Well, soon as I finish my business and turn around, two cops are standing there to arrest me. My friends are sitting there like grinning idiots. They both dropped the ball quite clearly. The cops take my Bourbon Street gold (beads) and put me in the cruiser, headed down to central lockup. I went through processing, a strip search with about a dozen other fine citizens, and then get put in the clink for about 5 hours until my friends bailed me out. I was thirsty, and I needed to make up time. Did I learn my lesson? What do you think?

See you down south, friends. C’mon down and I’ll buy you a drink. Just look for the guy holding up the bar and keeping the stool warm. It’s gonna be a long weekend and I might appreciate the company.