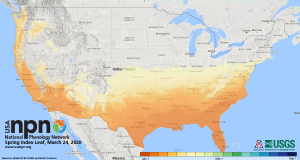 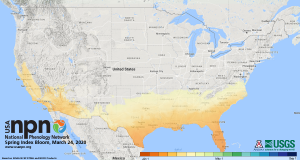 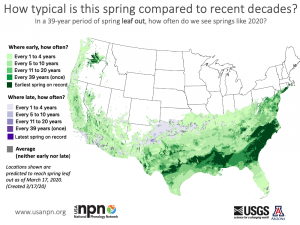 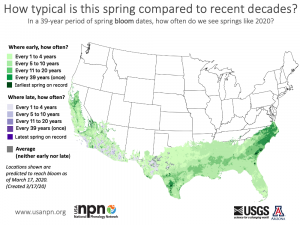 As spring has finally arrived, we thought it would be interesting to share some maps that show just how ‘normal’ the bloom is this year. The United States Geological Survey (USGS) and the National Phenology Network (NPN) created this website to show when spring arrives each year through visually appealing maps and animations.

The website uses two different models used to calculate when spring arrives each year: the First Leaf and First Bloom Indices. These models are mathematical predictions of the start of spring based on either the timing of ‘leafing out’ (leaves opening), or the blooming of species that are active in early spring. These indices were originally created using on-the-ground observations of the first leaves and first blooms of controlled lilac and honeysuckle cultivations, which were chosen as they are among the first plants to bloom in the spring and are common across much of the United States. In subsequent years, the models are generated based on temperature and weather events recorded in the NOAA National Centers for Environmental Prediction Real-Time Mesoscale Analysis that coincide with known climatic patterns tied to spring leaves and blooms. In order to assess how ‘normal’ each year’s spring is, they calculate the difference between the estimated day the leaf out or bloom occurs in the current year and the long-term average (1981-2010) day. To see how often a spring is early or late, they compare the current Spring Index Anomaly values to anomaly values from 1981-2019, dividing the 39 years in record by the number of times the spring was earlier or later than the current year.

This year, the spring bloom and leaf out occurred early in several parts of the US. Boston, MA and Providence, RI are 2-3 weeks early, parts of NV and the Northwest are 1-2 weeks early, and in parts of several states in the Southeast and Southwest the bloom ranges from 1 day to 3 weeks early. In certain areas of the Columbia Plateau, the leaf out was as much as 30 days early. In parts of the Northwest and Southeast (Oregon/Washington and Georgia/South Carolina/Louisiana) this year’s spring is the earliest in the 39-year record.

All of this data is openly accessible and available at usanpn.org as long as appropriate attribution is provided (e.g., “Source: USA National Phenology Network, www.usanpn.org”).