The Soft Core of the Earth – Overrated Places VII

Hometown’s suck. Sure, they’re filled with memories and nostalgia, and after you’ve been gone for a while, they can be nice to return to. But after years of doing so, for me, mine has kind of lost its luster. I blame this on a number of things, some the inherent faults of the city, some due to the time spent in it – which was likely too long, admittedly. I’m from “downstate” Illinois, right smack dab in the middle of farm country. While the city has an awful lot of trees which makes it somewhat scenic, there isn’t much else in the way of aesthetic beauty. It’s flat. No mountains here, not even any rolling hills. There are two places where kids would go to sled which pass as “hills,” but in reality, they’re speed bumps, maybe 300-400 feet high, tops. There are no lakes or rivers here. There are not any forests here, well, none of any size. Certainly not the type you can wander off and get lost in for a few hours. Sure, you can drive a little way to lakes, rivers, and forests (but no mountains), but as far as a “backyard” to play in, it’s quite lacking. The winters can be brutal. Winds can be high; temps are often low. Snow doesn’t fall as much as it used to – thanks, climate change – but when it does, it usually coats everything and then turns to ice, colored brown, gray and yellow by the conditions of nature and society, staying put for weeks at a time making it hazardous to walk anywhere. The summers are terrible, too. It’s really hot – low-90s is fairly common, but even when it’s “cooler” (i.e., only in the mid-80s), the humidity is often off-the-charts, in the 70% range. Maybe that has something to do with the Lake Effect from Lake Michigan, but Chicago is 120 miles away. That’s another issue. This place is smack dab in the middle of nowhere. Indianapolis is 100 miles east, St. Louis is 180 southwest, and there ain’t much in between. Some like it that way, I guess. Others don’t, me included. Now don’t get me wrong, I like solitude and being healthily disconnected from society and hordes of people and cities, but when there ain’t much going on, then it’s nice to have those places be a little closer when you get the itch. I digress. 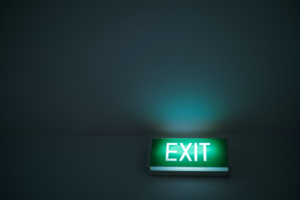 I’m always looking for the way out. (Image retrieved from https://unsplash.com/s/photos/exit-sign, courtesy of bady abbas)

The spring season is okay, but it rains a ton. By the time you get to early May, and for about a month, it’s pleasant. After the rains, before the heat and humidity. But fall is really the best season here. About halfway through September after the summer heat has broken, but still nice enough for t-shirts and shorts during the day – but jeans and maybe a light sweatshirt at night, it’s amazing. This lasts until the end of October if you’re lucky, what we call “Indian Summer” around here, though I imagine that is no longer politically correct. Nothing is anymore. It really is my favorite season anywhere, and that I truly miss, but it surely isn’t enough to make me want to come back on a permanent basis. Hometowns suck anyway.

As long as I can remember, all I ever wanted to do was leave my hometown. It’s not like I had some terrible childhood, I didn’t, just that I got bit by the wanderlust bug early, and while I’d only been a handful of places around the United States, what I had seen at an early age suggested there was more – and better – out there. Also, I think I wanted to chart my own course, and obviously I wanted out of the heavy-handed rule of my parents. They were pretty strict, but my tendency to screw up and make bad decisions only compounded that. Kind of like a Chinese finger trap. Oh, that’s probably not politically correct anymore either. I don’t care.

So, when it came time to start looking for a college, I told my parents I wanted to go out-of-state. Based on my mediocre performance in high school, my tendency to not take anything seriously, and my penchant for getting in trouble and generally making poor decisions, they were skeptical. But they relented and said that if I found a school that had a program I wanted to pursue that was no more expensive than in-state tuition, they would consider it. I found Utah State University in Logan, UT and California State University – Chico. For whatever reason, tuition was comparable. It didn’t matter though, they reneged on that offer pretty quickly. Bottom line: they didn’t trust me not to screw this up. So, I settled on the in-state school furthest from home, down in the southern tip, closer to Missouri, Arkansas, Kentucky and Tennessee than my hometown. At least I would feel like I’d gone a world away even if it would only be a little over a 3-hour drive. Well, I was supposed to live with a friend from high school, but as the last few months of high school started to slip away, I realized two things: 1) I didn’t want to live with this friend anymore (I think it was because I didn’t see him as helping me out much in the social world of college) and 2) that the college I’d chosen was kind of like the 13th grade – a dummy school. That was odd, because that definitely factored in, but as I stated above, it’s not like I had been a good student thus far, and I certainly wasn’t thinking of the future in any mature way. So, what happened? I stayed in my hometown and went to the university there. The place I wanted nothing to do with but get away from ended up being my hometown for 5 more years (yes, I took the extended package of college.) But believe you me (what a corny phrase), as soon as I was done, I was gone. You’ve read about some of those other places if you’ve been following this column.

Over the last 20 years I’ve been back home to see my folks and such probably north of 70-80 times. For a while there, when I still had some friends around and was young enough to still enjoy going out to the bars and getting ripped until 2am, it was enjoyable. But then I got older, people moved away, and I became more and more comfortable in my own space – and less in the space of others (even if my folks still live in the same house I was born in). I wouldn’t say that I dread coming back – that wouldn’t be true, but I do dread parts of it. And I certainly always feel like I’m there too long, even if it’s only for a few days. I don’t know, hometowns are hard to return to. In some ways they stay the same, in others they change completely. I certainly can’t imagine ever living here again, that would be a cruel joke I wouldn’t want to endure. The stuff of nightmares.

I imagine once my folks pass on, I won’t return again. There won’t be a need. I doubt there’ll be a desire. I still have a gaggle of friends in Chicago, so I’ll come back to the state from time-to-time, I imagine, but “home” will cease to exist. At least my original conceptualization of home. I haven’t considered anywhere else I’ve lived to be home, and I wonder if I’ll find that sensation again elsewhere. I don’t know if it’s necessary, though. I mean, hometowns suck anyways…

Marco Esquandoles
Home is a Figment of Your Imagination