In May we checked out one of the most historic stadiums in Major League Baseball (MLB), and for this edition of the Pléiades 1 – SPOT 6/7 Stadium of the Month we move to the West Coast with a focus on a stadium hosting a mid-season rivalry game, Petco Park in San Diego, California. 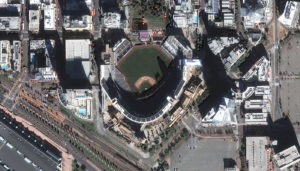 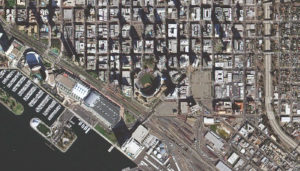 A 50-cm color image of Petco Park in San Diego, California, USA collected on December 20, 2020 by Pléiades 1B; and then a 1.5-m SPOT 6 image of the same stadium even collected on the same day! These images have custom processing and color balancing applied by Apollo Mapping. PLEIADES © CNES 2021, Distribution Airbus DS. SPOT © Airbus DS 2021.

About the Stadium: Home of the MLB’s San Diego Padres, Petco Park is located in downtown San Diego just a long homerun from the Pacific Ocean. Plans to replace the Padres original ballpark, Jack Murphy Stadium, were announced in 1996 by then President Larry Lucchino who was also instrumental in opening Camden Yards in Baltimore, Maryland. San Diego voters approved plans for the stadium in 1998 and the $411 million stadium opened its doors in 2004 after a two-year construction delay. Petco has owned the naming rights to the stadium since 2003 and renewed them this year through at least 2027 for a reported $3 million or more per year. At some 42,000 seats for fans, Petco Park features a Bandera Bermuda natural grass playing surface though with the ongoing COVID crisis here in the USA, only 33% of these seats will be filled for home games.

Fun Factoids: (1) With recent acquisitions and player development by the Padres, the National League West team has grown into a powerhouse that is challenging the long-standing dominance of the Los Angeles Dodgers in this division. Further, as Los Angeles and San Diego are a short drive from one another, recent Padres-Dodgers series have emerged as one of baseball’s best rivalries; and on June 21st, 22nd and 23rd the rivalry is continued at Petco Park! (2) The two-year construction delay on Petco Park mentioned above was the result of a legal battle over the Western Metal Supply Company building which was designated a local historic landmark. The two sides came an agreement when the Padres decided to incorporate the old building into the façade of Petco Park. (3) Petco Park is one of the hardest stadiums to score runs in, ranking just 25th out of 32 major league stadiums with regards to its ESPN Park Factor. (4) Despite opening Petco Park in 2004 which resulted in a temporary attendance spike, in general attendance at Padres games has declined significantly through the 2000’s and 2010’s with a slight uptick in recent years as the team has improved its Win-Loss percentage.