Last month we checked out Major League Baseball’s (MLB) newest ballpark in Texas, and for this edition of the Pléiades 1 – SPOT 6/7 Stadium of the Month we stick with our baseball focus heading to Boston to check out Fenway Park, which is actually the oldest stadium in the league. 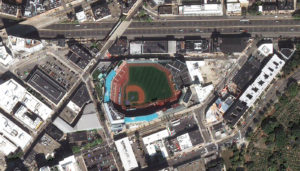 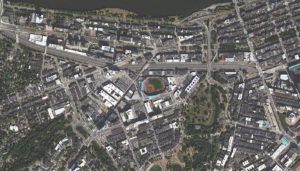 A 50-cm color image of Fenway Park in Boston, Massachusetts, USA collected on September 23, 2020 by Pléiades 1A; and then a 1.5-m SPOT 7 image of the same stadium even collected on the same day! These images have custom processing and color balancing applied by Apollo Mapping. PLEIADES © CNES 2021, Distribution Airbus DS. SPOT © Airbus DS 2021.

About the Stadium: Located less than half a mile (about 0.5 kilometers) from the Charles River Basin in the Boston, Massachusetts neighborhood of Fenway, Fenway Park is one of MLB’s most historic stadiums with the 37-foot Green Monster towering over left-field. Fenway Park is an example of the Tapestry Brickstyle which was popular in the early 1900s whereby bricks were laid in one-plane decorative patterns. Before Fenway was built, the Boston Red Sox, one of MLB’s oldest franchises, played their home games at the Huntington Avenue Grounds. In 1911, then owner of the Red Sox, John I. Taylor, decided it was time to move the team to a new stadium so he bought the land that now houses Fenway Park and by 1912 he opened its doors for a cost of about $650,000. Originally opened with a seating capacity of 27,000 fans, today the park features some 37,305 seats for daytime games (37,755 seats at night) having undergone many rounds of renovations with the last significant one complete in 2012 for $285 million. Fenway Park features a 100% Kentucky bluegrass playing field which was brought in from New Jersey in 2019.

Fun Factoids: (1) Fenway Park was added to the National Registry of Historic Places in 2012 – the only other ballpark to receive this honor is Chicago’s Wrigley Field. (2) On April 14, 1974, Willie Horton hit a towering popup directly over home plate and unfortunately it struck and killed a pigeon in mid-flight. (3) In a not-so-creative move, John Taylor named Fenway Park after the Boston neighborhood that also bears its name. (4) The first baseball game played at Fenway Park was actually between the Red Sox and Harvard University, where the Sox won two to nothing.