The Soft Core of the Earth – Overrated Places III

I guess I am using the term “overrated” pretty loosely in this series of rants, especially so with this locale: the Starkville, MS “metro-area.” Now this is a place you don’t want your car to break down in if there ever was one. After spending all of my life itching to get out of my hometown, home state, and home region, I finally did. A perfect case of “be careful what you wish for,” I guess. I ended up moving to rural Mississippi based on a professional opportunity that seemed like a good chance to learn about a possible career. I’d kind of known someone who’d walked through the same open door in the recent past, so if nothing else it seemed like a guaranteed pass out-of-Dodge, just what I was looking for. Well, no one understands what a culture shock is until you live through one, and this was to be the first of many in my life.

I moved from the Midwest down to the “Stark-Vegas” area (as it’s lovingly, or more accurately, jokingly, known) in early August of 2000, when the heat and humidity was at its worst for that area. I’d packed up everything I would need for a short, 5-month internship (though I didn’t really own much at the time anyway), and I left my friends, my dog, and my life behind me (my dog stayed with a friend if you’re wondering). I got a little bit later start than expected, so I didn’t get down to the wildlife refuge (where I would be living and working) until close to midnight, well after any sign of life had left. Still young and resilient, I stripped down to my boxers and curled up into a ball in the passenger’s seat of my SUV to sleep. Obviously, the meteorological conditions didn’t make for a sound sleep, nor did the impromptu bed, but regardless, I fell asleep and was woken up by someone knocking on my window about 7 a.m. asking if I needed help – it was my new boss. I explained who I was, and he greeted me enthusiastically, then he pointed down the road to a house I couldn’t see in the pitch dark, less than two football fields away – my abode for the next half a year. I can only imagine what this Southerner’s first take of a half-naked Northern boy ending up on his stoop was, but I’m sure I had enough antics during the duration of my time there to confirm most of his beliefs – and concerns. 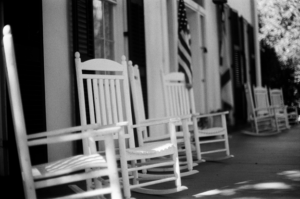 Lynyrd Skynyrd sang tongue-in-cheek about Neil Young in the song, “Sweet Home Alabama,” that a “Southern man don’t need him around, anyhow.” I’m sure the Southerners I worked with thought the same of me. (Image retrieved from: https://unsplash.com/photos/Rsfakgvs7Hg, courtesy of Emily Corley.)

A new job is always awkward and tough, but a new job in a new state and a totally different way of life than I’d been accustomed to living for the last 5 years made it even more of an adjustment. I don’t recall bringing any food with me, so I assume I just worked through lunch on that first day, but I do remember going into town, about a 30-minute drive down mostly unimproved roads, to get groceries later that night. I went with my fellow intern, a guy from my college who I only vaguely knew from class. He arrived about a week before me, so he had the lay of the land – and the first choice on rooms – but was eager to have someone to pal around with. Like most guys at that age, he loved beer and there was plenty of evidence of that strewn about the cabin in the form of empties. Anyhow, I arrived down in MS with less than $100 to my name, and never having been the kind of shopper who planned terribly far in advance, I loaded up the cart with everything I thought I’d need for a week’s worth of meals and snacks, not to mention a 30-pack of Busch Light cans. As the checker rung up my purchases, it became clear I wasn’t going to be able afford everything, so I took the beer off the conveyor belt. My new friend grabbed my arm and said, “Whoa, buddy, you’re gonna need that. I’ll loan you some money for now.” Fortunately, in addition to a free place to stay, we also got a $75/week stipend for food, so I could pay him back and begin to budget better, making sure I always had enough money for beer.

Just about every stereotype you can think of exists in the South, especially when you’re 22 and not from there, so they all made their way out of the woodwork in quick time. I was there to work with the resident wildlife biologist, but I’d do a series of random chores and duties with other staff as well. Looking back, it was a lot of fun – sometimes. But while I was there, I definitely always missed my friends, most of whom were wrapping up their last year of college. I was missing out and it sucked. Nonetheless, there I was, and there was work to be done. I tried to enjoy it when I could.

Some of the things I did enjoy doing were reminiscent of boyhood fun. They used to turn me loose on an ATV with a GPS backpack to go out to map trails and deer blinds for the upcoming hunting season. I spent days by myself raising hell and ripping through the forests; it was a blast. Some days I had to get up really early to trap and tag wood ducks for the hunting season as well. We’d go out to the ponds before daybreak and lay low until the ducks settled into the water, then we’d blast a huge rope net over them and take them one-by-one and put little tags on their ankles and set them free. The purpose was to check their migratory patterns and their relation to hunting seasons. That was fun, too. Onsite we also worked with the endangered red-cockaded woodpecker. Again, very late at night, or very early in the morning, depending on how you look at it, we would sneak up to loblolly pines and take the adult birds from their nests and move them to a different part of the 40,000-acre forest to disperse their numbers and increase breeding efforts in other areas. We’d put them into in-tree “nests” (dugouts we’d cut out and made a pine-nest insert) and cover the hole with a screen so they could see and breathe but couldn’t leave, then we’d come back 2-3 days later and remove the screen. The idea was to get them to leave their scent so they’d return to it and call it home. I guess it worked… Also on site in the marshy ponds were 12-15 alligators, and we’d often have to go out into the ponds and lakes in a canoe and remove a bunch of the invasive algae and blooms that were in the water with a net. We were always in fear that one of the gators would grab our arms or tip over our canoes, but they never did. They were there and they were real, though. The wildlife biologist I worked for lost his dog to one, and during the months I lived there a group of college kids driving too fast on the dirt roads dumped their car into one of the lakes. When the superintendent came in real early the next day, he saw two kids sitting on the roof of their car, scared to swim ashore because the gators were sitting there watching them, hoping for a meal.

A whole bunch of other cool stuff happened while I was down there as well, but I imagine you get the point. So, what makes it “overrated,” you might ask? Well, like I said, it was a culture shock, and dealing with some of the backwardness of the South was challenging. Racism was ever-present but somehow collegial and polite. For instance, the black guys I worked with all had nicknames but none of the white guys did. One guy, Elvis, was named Billy. Another guy, Tom, was named Buck. Neither knew how they got it, but it was clearly a relic of the Old South. Most of the white guys were really, truly nice to me, even if they had their reservations about welcoming a Yankee into their lives. They still clung to the Civil War and their Southern Pride. There was a couple that lived on the refuge, the wildland firefighters, both from NY. The male (who was a huge prick) would take any opportunity he could to bust the chops of the Southern boys. For instance, he would talk about how, “The fish down south [weren’t] as good of fighters as those up north,” and this would summon a reply from one of the good ole’ boys that, “The only reason we lost the war was because we ran out of ammo.” He meant it, too. I learned to whistle, “Come back Dixie,” and the tune still hasn’t left my head. I’m not sure what I think of that.

We’d go into the “city” of Starkville, a rundown, yet somehow still quaint college town, when we had the opportunity (and a few extra bucks) to post up at Flo & Eddy’s and drink beer and watch college football. That’s where I learned how serious fandom could be for some (I caught the bug as well). These were also our few opportunities to engage with the locals, and we found them as perplexing as I’m sure they found us. Another day, back on the refuge, there were a bunch of regional land managers making fun of us because we went to college. Yeah, that was the culture down there…

Anyhow, I guess it sounds mostly enjoyable now that I think about it and see it all written down, but it’s definitely high on the list of places I don’t think I need to return to anytime soon. It might have something to do with the run-in with the Klan, being stalked with infrareds by a co-worker, having to give up personal space to a group of grad students they wedged into our cabin with no concern to our input, the bizarre love triangle with two other co-workers and a wife in the middle, or the “church” that happened in the basement of another co-worker’s house that only had three congregants, but those are all stories for another day, perhaps…