Last month were in the south-east of the USA to check out the site of America’s most watched sporting event, and for the March edition of the Pléiades 1 – SPOT 6/7 Stadium of the Month we travel to the site of another of America’s favorite sporting events that being Lucas Oil Stadium in Indianapolis, Indiana – the site of March Madness’ final games. 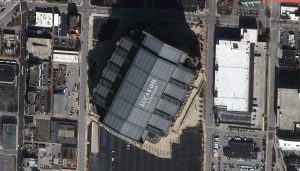 A 50-cm color image of Lucas Oil Stadium in Indianapolis, Indiana, USA (check out the HD video display!) collected on November 13, 2020 by Pléiades 1B; and then a 1.5-m SPOT 6 image of the same stadium collected on November 7, 2020. These images have custom processing and color balancing applied by Apollo Mapping. PLEIADES © CNES 2021, Distribution Airbus DS. SPOT © Airbus DS 2021.

About the Stadium: Located in downtown Indianapolis just to the east of the White River, construction on Lucas Oil Stadium started on September 20, 2005 as a replacement for the RCA Dome which would allow for expansion of the convention center. The stadium opened three years later on August 16, 2008 and hosted its first sporting event on the 22nd – a football game between Noblesville High School and Fishers High School. Built for about $720 million, the funds for construction were raised by the State of Indiana, the City of Indianapolis and from the Indianapolis Colts – the football team which calls Lucas Oil home. The naming rights for the venue were actually sold before it opened in 2006 to Lucas Oil Products for $122-million over a 20-year contract.

Fun Factoids: (1) Given the ongoing COVID crisis here in the USA, the NCAA has decided to play all of its Men’s Basketball March Madness games in the state of Indiana to reduce possible exposures and infections from extended periods of travel. The vast majority of the 67 games will be played in Indianapolis between various college arenas and other local stadiums. The Final Four games are scheduled for Lucas Oil Stadium on April 3rd and 5th. (2) The outside of Lucas Oil Stadium features 980,000 bricks – which if lined up would extend from Indianapolis to Chicago! (3) 7,000 extra seats can be added to the stadium expanding its capacity to about 70,000 when it’s setup to host a basketball game. (4) Lucas Oil Stadium features a FieldTurf playing surface which weighs in at over 820,000 pounds!