In January we checked out the site of an extreme winter sports event in Colorado, and for this edition of the Pléiades 1 – SPOT 6/7 Stadium of the Month we head to the site of Super Bowl 55, Raymond James Stadium in Florida. 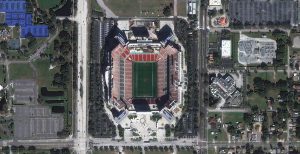 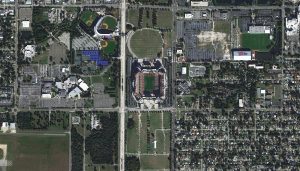 A 50-cm color image of Raymond James Stadium in Tampa, Florida, USA (check out the HD video display!) collected on December 19, 2020 by Pléiades 1B; and then a 1.5-m SPOT 6 image of the same stadium also collected on the same day! These images have custom processing and color balancing applied by Apollo Mapping. PLEIADES © CNES 2021, Distribution Airbus DS. SPOT © Airbus DS 2021.

About the Stadium: Raymond James Stadium is located on Florida’s west coast in north-west Tampa, right next to Tampa International Airport and some 3 miles (5 kilometers) from Old Tampa Bay. Pushed forward by the owner of the National Football League (NFL) team, the Tampa Bay Buccaneers, Raymond James Stadium broke ground on October 15, 1996 and opened on September 20, 1998 to host its first game between the Buccaneers and Chicago Bears. The naming rights for the stadium have been owned by Raymond James Financial since it opened, with a second renewal signed in 2016, securing the name through 2027 for a reported $3.1 million per year. In 2016, a multi-year renovation plan for Raymond James commenced and was completed by 2018 with a $160-million plus price tag. The renovations included a new 10,000 square foot bar, 134 luxury suites as well as the world’s most advanced HD video system with 31,000 square feet of video displays and over 400 speakers pushing out more than 750,000 watts of sound power!

Fun Factoids: (1) Raymond James Stadium is set to host the NFL’s Super Bowl 55 on February 7th. Originally set for SoFi Stadium, Super Bowl 55 was moved to Tampa when SoFi’s completion date was delayed. With the ongoing and escalating COVID crisis here in the USA, Super Bowl 55 will see it’s smallest crowd ever as Florida restrictions will limit the event’s capacity to just 20% or a bit over 13,000 of the stadium’s total 65,618 seats. (2) Raymond James Stadium seems to be used year-round as it has a busy schedule of events, including home games for the Buccaneers and the NCAA football team, the South Florida Bulls. It also hosts two NCAA football bowl games, the Outback and the Gasparilla Bowl; the Monster Jam; the Sunset Music Festival; a multitude of other sport events and even concerts by Beyoncé, Taylor Swift and U2. (3) The stadium features a 100-foot-long pirate ship that fires its loud cannons for each Buccaneers touchdown and field goal. The ship also features a remote-controlled parrot that talks to fans that pass below.