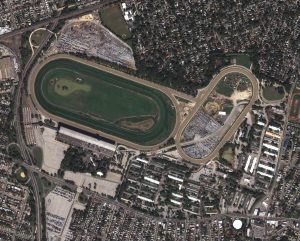 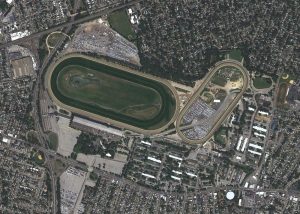 A 50-cm color image of Belmont Park in Elmont, New York, USA collected on October 6, 2014 by Pléiades 1A; and then a 1.5-m SPOT 6 image of the same horse track collected on August 28, 2014. These images have custom processing and color balancing applied by Apollo Mapping. PLEIADES © CNES 2019, Distribution Airbus DS. SPOT © Airbus DS 2019.

For the unofficial start of summer in the Western Hemisphere we checked out one of the sites of the FIFA Under 20 World Cup, and for the June edition of the Pléiades 1 – SPOT 6/7 Stadium of the Month we head back to the States to check out the site of the last leg of the Triple Crown, Belmont Park in Elmont, New York.

About the Venue: Located just east of New York City where Queens County and Nassau County meet, the vision for Belmont Park started in 1902 when a group of investors bought a 650-acre tract of land originally called Foster’s Meadow. Over the next three years, a horse race track modeled after its European predecessors was built, opening on May 4, 1905. Since then, Belmont Park has seen significant changes, for example when it was closed in 1963 due to structural issues and then re-opened in 1968. In 2012, Belmont Park was significantly remodeled with new HD TVs installed throughout, increased restaurant and amenity space as well as improved public transit. The Grandstand at Belmont Park is one of the largest at a horse racing track, with seating for 33,000 fans and then standing room for 67,000 more.