The Pléiades 1 – Pléiades Neo Stadium of the Month – Zuiderpark

In March we found ourselves ‘down under’ at the site of a major women’s cricket event, and for the April edition of the Pléiades 1 – Pléiades Neo Stadium of the Month we head to Europe to check out the site of the Invictus Games in the Netherlands, i.e. Zuiderpark. 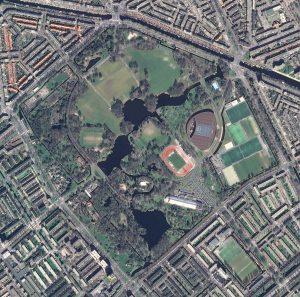 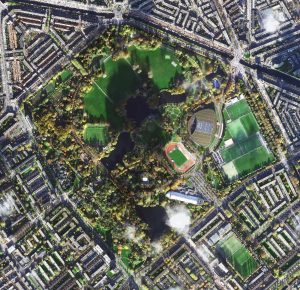 A 30-cm color image of Zuiderpark in The Hague, Netherlands collected on November 19, 2021 by Pléiades Neo 3; and then a 50-cm Pléiades 1A image of the same stadium collected on March 23, 2020. Oh, and apologies for the cloud in the Pléiades Neo imagery but the archive is still growing! These images have custom processing and color balancing applied by Apollo Mapping. PLÉIADES © CNES 2022.

About the Stadium: Located south of the center of The Hague in the Netherlands, Zuiderpark is a large urban recreational area that covers some 105 acres. Built in 1936, the park takes its name from its location as Zuiderpark roughly translates to the, ‘southern park’. The park is used throughout the year, hosting concerts, festivals and many sporting events on its soccer and cricket fields, track and several indoor stadiums. The most recent addition is Sportcampus Zuiderpark which opened in June 2017 after several years of construction and some $61 million in costs. Sportcampus Zuiderpark actually stands on the location of the old home, i.e. Zuiderparkstadoin, of the local soccer team, the ADO Den Haag, which was demolished in 2007

Fun Factoids: (1) Originally planned for 2020 and canceled due to the COVID pandemic, Zuiderpark will host the 5th Invictus Games from April 16th to the 22nd. The Invictus Games are not about winning rather they are held to honor the strength and resolve of wounded, injured and sick servicemen and women who bravely served their countries. The 2022 Invictus Games will feature more than 500 athletes competing in ten events. (2) Zuiderpark is not only The Hague’s premier recreational facility, it is also one of its most widely used music venues, hosting a variety of festivals and concerts each year, including Parkpop which is the Netherland’s largest annual festival. (3) Zuiderpark features a model train depot with some trains large enough for people to sit on and ride!