The Pléiades 1 – Pléiades Neo Stadium of the Month – Eden Park 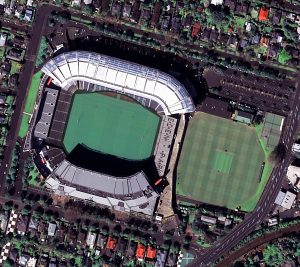 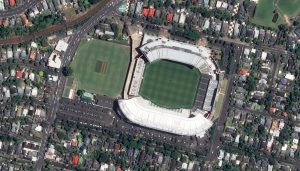 A 30-cm color image of Eden Park in Aukland, New Zealand collected on September 17, 2021 by Pléiades Neo 3; and then a 50-cm Pléiades 1A image of the same stadium collected on December 23, 2021. These images have custom processing and color balancing applied by Apollo Mapping. PLÉIADES © CNES 2022.

Last month we were in China at one of the 2022 winter Olympic venues with our first glance at full-resolution Pléiades Neo imagery samples, and for the March edition of the Pléiades 1 – Pléiades Neo Stadium of the Month we travel south to New Zealand with a look at the largest venue used for the Women’s Cricket World Cup, i.e. Eden Park.

About the Stadium: Eden Park is located in New Zealand’s most populous city, Aukland, about equidistant from the surrounding bays. Originally the location of a swampy marsh, the grounds where Eden Park stands today were first used for sports in 1900 and then first used for cricket in 1903. The stadium’s first grandstands were installed in 1913 with a major redevelopment completed from 2008 to 2011 in order to host the 2011 Rugby World Cup at a cost of more than $240 million. Eden Park’s current seating capacity is just under 50,000 and it features a synthetic fiber – natural grass blended surface installed in 2021 by HG Turf Group. The park takes its name from Mount Eden which is located in the suburbs of Aukland.

Fun Factoids: (1) Originally scheduled for 2021 and postponed due to COVID, the 2022 Women’s Cricket World Cup will be held in New Zealand during March and April at six different venues – with Eden Park by far the largest of them all. Given the recent surge in COVID cases, the Women’s Cricket World Cup will have strict seating rules in place. (2) When Eden Park replaced its ryegrass field in 2021, fans were able to purchase the original turf at a starting cost of $200 for 10 square meters (about 108 square feet). (3) Eden Park has hosted two Rugby World Cup finals, one in 1987 and one in 2011, and both were won by the home team, affectionately referred to as the All Blacks. However, they have not been as successful at Cricket World Cup events held at the stadium, with a loss in the 1992 semi-final and then a win in the 2015 semi-final. (4) In 2021, Eden Park was declared the world’s most popular cricket ground according to Instagram and Facebook check-ins as well as internet search volume.