I think I watched 15 minutes of a Saints’ game this NFL season. I was never much of an NFL fan, but I grew up cheering for the Bears, rooted for the Broncos when I lived in Colorado, and adopted the Saints way back in 2000 when I lived in the deep south (and NOLA is my favorite city); but typically, I wouldn’t really pay attention to the NFL until the playoffs started. This year I just haven’t paid attention at all. This is for numerous reasons: I’m trying to watch less TV, I watch a lot of college football, so the last thing I want to do on a Sunday is watch more football on TV, but I’ve also grown to like the sport a little less. Don’t get me wrong, I like watching people give each other concussions, ruptured spleens and paralysis just as much as the next guy, but it is getting a little old for me. Which is kind of sad, because at one time in my life I used to live for Gameday Saturdays. Logging 12 hours in front of the idiot box was easy. And gross. Kind of like too much sugar on your cereal; it sounded good beforehand, but now you feel sick and your whole day is ruined… 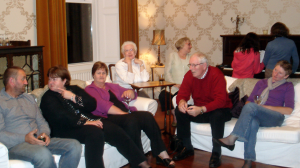 I’m sure they’ll all say they had a good time. We’ll know they didn’t.

But that isn’t really what I’m here to write about today, this fine first Sunday in February, a de facto national holiday that is utterly ridiculous. I was out with some friends yesterday and they were talking about all their “big” plans for the “big game” and I scoffed. I asked some of them how many NFL games they watched this season; most said one or two, some said none. So I asked, “Then why do you care?” The responses were mostly something along the lines of it being a “good excuse” to get together with friends; just another corporate culture / pop culture manufactured day to spend and be hypnotized by the brands and braggadocio. As if all the other faux holidays weren’t enough (New Year’s Eve, etc.), we have made another day where we have to conform to societal norms less we be labeled weird for not taking part. I’ve watched every Super Bowl of every year that I’ve been alive, at least for as long as I can remember. I stopped really caring long ago, but for whatever reason I hung on long past the expiration date of my interests and enjoyment. This year I take a stand: no game, no stupid commercials, and no care at all. I won’t be able to relate to how funny you thought the Dorito’s commercial was, what an awesome halftime show it was, and oh yea, I may not even know who won the game. And I’ll be better off because of it.

One of the things that bugs me about the Super Bowl is that it has taken on the feel of a national holiday. We’re likely not too far from having Super Bowl Monday off from work; I’m sure many people would love that. But I just don’t know why it is awarded such glamor, especially by people who don’t follow football at all. I have to ask myself what these people would be doing with their time on any other Sunday in February; maybe it just comes down to being stuck in the middle of winter and folks just need a push to get motivated again. I don’t know. But it has gotten so that people plan these intricate parties, get special wardrobes, and make their plans weeks in advance. In some social circles, a Super Bowl party invitation is a sign of social success; you’re “with it” if you got invited to the cool party. Vomit. And it’s not like I’m against parties, or pre-arranged parties, or even pre-arranged parties that center around a very specific event. I’m not, really. It’s just that I’m bothered by the corporatization and social pressure to do things that in the grand scheme of things we really don’t care about. Sure, if the Saints, Broncos, or Bears were in it, I’d watch. But they’re not, so why should I have to watch? Why should I care?

People are fragile creatures that all want to be loved and respected, and thought to be cool by their peers and through their appearances. For far too many of us, the most direct, and chosen, route is through the social structure of pop culture. Let those in the know tell us what we should be doing, wearing, watching, going, believing, etc. It takes the onus off of us to have any authenticity or agency in our lives. If we’re on autopilot we just turn on our switch and shuffle along blindly. So by now someone is probably taking great offense to this. They (you) might be saying, “So I’m a bad person because I enjoy having a Super Bowl party for my friends and sharing some good times and laughs over beer and food?” Yes. Well, no, not really, but yes. You’re a puppet if you do something just because someone (or society) suggests you do; if you follow the script that Big Brother writes for you. Let me ask you a question: If the powers-that-be told you that it was the socially desirable thing to do to watch a big stakes poker game instead, would you do it? Yea, probably so. All you people that watch reality shows are complicit in the Grand Plan: stay placated, buy often. Don’t disrupt the status quo. The Super Bowl, along with New Year’s Eve, Valentine’s Day, St. Patrick’s Day and the like, are all about the same as Celebrity Apprentice or The Biggest Loser: materialist, consumptionist attempts at controlling the dialog. The “big days” just set us up for the same routines day in and day out. If we tell you to watch and celebrate the Super Bowl or New Year’s Eve, and you do, or if we tell you to watch America’s Got Talent, and you do, then it is just that much easier to control your other habits as well. If you don’t believe me then you’ve already been had.

So while you’re at your party, likely having a good time (maybe, hopefully), not fully focused on anything because you’re distracted by everything, and come home slightly buzzed and not quite sure of where the last 5-6 hours went, I’ll be doing something productive, something truly enjoyable, in that I chose the activity myself, based on what I want and need to do, not because I just plugged myself into the American social calendar of preferred activities. So am I better than you? Yes, most likely, but not because of this. I’m just more awake than you. Or as the kids say these days, “I’m woke.” I invite you to wake up and plug in – or more accurately, unplug – from life as scripted by someone else. If you wouldn’t do something of your own volition, accept that there are better choices to be made with your time and your attention. Because in the end what the Super Bowl really symbolizes is another forfeiture of our attention, another sacrifice of our time, and other loss of ourselves.

In the end, the “big game” actually does involve you: you’re just the one getting played.