Name & Its Origin: WVU Coliseum has been named so since the arena was opened in 1970 and its origin is obvious and non-imaginative as WVU Coliseum is named after West Virginia University – dersh. 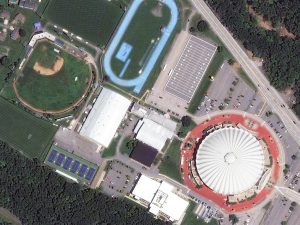 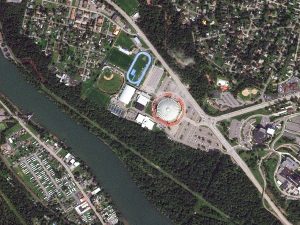 A 50-cm color image of WVU Coliseum in Morgantown, West Virginia, USA collected on July 26, 2017 by Pléiades 1A; and then a 1.5-m SPOT 6 image of the same stadium collected on September 10, 2017! These images have custom processing and color balancing applied by Apollo Mapping. PLEIADES © CNES 2018, Distribution Airbus DS. SPOT © Airbus DS 2018.

Location: The Coliseum is located on the western side of the WVU campus in Morgantown less than a quarter mile (about a third of a kilometer) from the banks of the Monongahela River at about 1,035 feet (~315 meters) above sea level.

Stadium Capacity/Size, Architect & Build Date: Ground broke on the construction of the WVU Coliseum in December 1968 and was completed some two years later for its official opening on December 1, 1970. Designed by Silling Architects, the arena cost just $10.5 million to build. With room for 14,000 basketball fans, the Coliseum is often considered one of the most important buildings in West Virginia.

Type of Field Surface: Unfortunately no details were available on the flooring type used in WVU Coliseum so we will just have to assume it is hardwood!

Key Sports Teams: The Coliseum is the home of the men’s and women’s basketball team for the West Virginia University Mountaineers.

Most Popular Yearly Event: Besides hosting popular Big 12 conference basketball home games, the WVU Coliseum sees plenty of action outside of basketball season, for example a concert series which included Migos in 2017 as well as a Harlem Globetrotters game.

Fun Factoids: (1) On January 27, 2018, the WVU Coliseum will host a men’s basketball game between the University of Kentucky and WVU as part of the Big12/SEC Challenge. Of the 15 games WVU has played against Kentucky, they have lost ten and won five. (2) The first event held at WVU Coliseum was not a basketball game – rather it was a Grand Funk Railroad concert! (3) When opened in 1970, WVU Coliseum was a one-of-a-kind structure with a roof held up by concrete ribs connected to an external ring so that there is an unobstructed view of the court.