We’ve been doing our Mapping for good series for well over a year now and it seems there’s no shortage of projects out there that we feel are worth highlighting. With so many issues facing our world today, it’s inevitable that cartography has found a way to play a positive role in many of the solutions being created by governments, non-profits and often just regular people. Such is the case with MappingPoliceViolence.org, started by three young folks with a passion for justice (though given their breadth of experience, I’m not sure calling them “regular people” would be fair, see their incredible biographies here.) 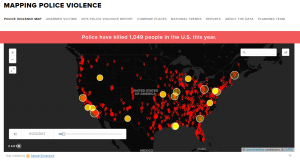 A screenshot of the main map on the site’s homepage, showing all incidents of police killings in a year-long time-lapse across the United States.

Mapping Police Violence does exactly as one would expect: the site’s home page presents time-lapsed map of all incidents in 2017 in which an individual was killed by the police. While this initial map is indeed a powerful visualization, it’s the wealth of additional data and statistics that makes the project so remarkable. An “Unarmed Victims” section details the alarming disparities between an individual’s race and the likelihood that they’ll be shot at while unarmed. For example:

“Nearly 1 in 3 black people killed by police in 2015 were identified as unarmed, though the actual number is likely higher due to underreporting”

And yet the site takes it steps further. Mapping Police Violence contains a wealth of data beyond its core map on the home page. With the Compare Places tool, users can compare rates of police killings between two given states and even between individual police departments. In an example shown by the site, the cities of Buffalo, NY and Orlando, FL are compared side-by-side to illustrate a powerful point: despite having nearly the exact same population (258,959 and 255,483 respectively) and almost identical figures for percent non-white (50% and 42%) and violent crime rates (12 per 100k and 9 per 100k), Buffalo had 0, zero police killings between 2013-16 whereas Orlando had 15! Below this example, and perhaps most shockingly, is a graph showing the percentage of cases in the year 2015 in which officers were not convicted of a crime, a whopping 99%.

Do we mention this project to take a particular side in the debates on police violence ever-so present in recent years? As a matter of fact, not at all. Many if not most police officers are incredible human beings without whom we’d be unsafe, unsupported and exposed to dangers to an extent that we too often take for granted. For that we are extremely grateful. However, the very value of a project like Mapping Police Violence is to allow the data to speak for itself, to provide valuable comparisons using its Compare Places tool or through its example of Buffalo vs Orlando, and in doing so highlight the isolated areas where such incidents have indeed become systemic in hopes that awareness will motivate their citizens to take action.

If you would like to learn more about Mapping Police Violence and check out their maps and charts, visit www.mappingpoliceviolence.org.