In November, we checked out the site of a key Pac-12 late season college football matchup, and so this month we move to our other coast with a look at Hard Rock Stadium in Miami, Florida – site of the annual Orange Bowl – for this Pléiades 1 – SPOT 6/7 Stadium of the Month.

Name & Its Origin: In its 30 years of existence, the football stadium in Miami used by both the Miami Dolphins and the University of Miami has had eight names. The latest is Hard Rock Stadium which the Hard Rock Café won naming rights to in 2016 for 18-years at $250 million. 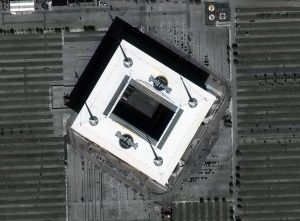 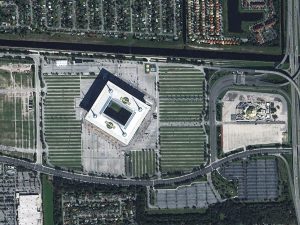 A 50-cm color image of Hard Rock Stadium in Miami, Florida, USA collected on January 8, 2017 by Pléiades 1A; and then a 1.5-m SPOT 7 image collected of the same stadium – even collected on the same day! These images have custom processing and color balancing applied by Apollo Mapping. PLEIADES © CNES 2017, Distribution Airbus DS. SPOT © Airbus DS 2107.

Location: Hard Rock Stadium is located in Miami Gardens, Florida which is a northern suburb of Miami about 12.9 miles (20.7 kilometers) from downtown and 7.6 miles (12.2 kilometers) from the Atlantic Ocean at just 5-feet (1.5-meters) above sea level.

Stadium Capacity/Size, Architect & Build Date: Originally opened as Joe Robbie Stadium, it is surprisingly hard to find details on its construction. According to Wikipedia, construction on the stadium broke ground on December 1, 1985 and completed on August 16, 1987 for $115 million. The original architect, Populous (now called HOK Sports), also completed the 2016 renovation of the stadium which cost a cool $500 million! Here is a time-lapse video of the 2016 renovations where after completed, the seating capacity of Hard Rock Stadium dropped from 76,018 to 65,326.

Type of Field Surface: Hard Rock Stadium has featured natural grass for its entire existence according to the news stories we see. In 2016, the field was a genetically-engineered grass species, Platinum TE Paspalum, however it is unclear what variety it may have been replaced with in recent months.

Key Sports Teams: Hard Rock Stadium has been the home of the National Football League (NFL) team, the Miami Dolphins, since the 1987 season; and is also the home of the college football team, the University of Miami Hurricanes.

Most Popular Yearly Event: Besides hosting home games for both the Dolphins and the Hurricanes, Hard Rock Stadium is used in a variety of events. For example, there was a summer concert series featuring U2, Metallica and Cold Play in 2017. You can also host a private event at the stadium. When it comes to championship football, the stadium has hosted five Super Bowls with its sixth scheduled for 2020; it is also home to the annual Orange Bowl game which is part of the College Football Playoff.

Fun Factoids: (1) The 2016 renovations of Hard Rock Stadium included a new, partially open roof that will provide shade to 92% of the seats inside. (2) The professional baseball team, the Miami Marlins, played 21 seasons in Hard Rock Stadium before moving to Marlins Park. (3) The 2016 renovations increased the total video screen square footage from 12,000 to 22,400 while moving fans from 80 feet to just 56 feet from the field. (4) After the 2020 season, the Miami area will have hosted 11 Super Bowls, the most for any city – with 6 of them at Hard Rock Stadium, second only to the Mercedes-Benz Superdome in New Orleans, Louisana.