Last month we checked out the site of a crucial Atlantic Coast Conference men’s basketball conference game, and in March we move to the site of the Big 12 Championship tournament (also for men’s basketball), the Sprint Center in Kansas City, Missouri, for this Pléiades 1 – SPOT 6/7 Stadium of the Month.

Name & Its Origin: The Sprint Corporation won the naming rights to this stadium in late July 2004 even before the voters eventually approved partial municipal funding to build the Sprint Center. The deal was a 25-year agreement worth $62.5 million. 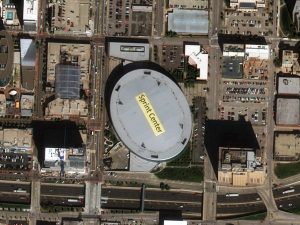 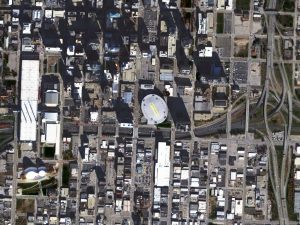 A 50-cm color image of the Sprint Center in Kansas City, Missouri, USA collected on September 28, 2017 by Pléiades 1B; and then a 1.5-m SPOT 6 image of the same stadium collected on November 19, 2017. These images have custom processing and color balancing applied by Apollo Mapping. PLEIADES © CNES 2018, Distribution Airbus DS. SPOT © Airbus DS 2018.

Location: Located in the Power and Light District of Kansas City, Missouri, the Sprint Center is about 1 mile (1.8 kilometers) from the Missouri River at 860 feet (262 meters) above sea level.

Stadium Capacity/Size, Architect & Build Date: Ground broke for the Sprint Center on June 24, 2005 and its doors opened about two years later for general public tours on October 10, 2007. The $198 million, ~19,000-seat (it can change configurations and therefore seating capacity) stadium was designed by a consortium, the Downtown Arena Design Team, and its construction was managed by M.A. Mortenson. Check out this cool time-lapse video of the construction of the Sprint Center.

Type of Field Surface: Unfortunately there were no details on the hardwood floor installed in the Sprint Center.

Key Sports Teams: When the Sprint Center was built, many local citizens thought that a pro NBA or NHL team would soon call the arena home – but this never happened. As such, the biggest sporting event of the year is clearly the men’s basketball Big 12 Championship tournament which year after year draws the largest average attendance of any conference championship tournament.

Most Popular Yearly Event: Without a major sports team, the Sprint Center has had to turn to other forms of entertainment to put cheering fans in the seats, and frankly the lineup is impressive! In 2017 alone, the stadium hosted a wide range of music acts, from Ariana Grande to Iron Maiden to Kendrick Lamar to Lady Gaga; as well as preseason NBA and NHL games and the NCAA Women’s Volleyball Final Four.

Fun Factoids: (1) The 2018 Big 12 Men’s Championship tournament will be held at the Sprint Center from March 7 to 10 and this year’s edition is sure to be one of the most watched tournaments given the overall strength of the conference. (2) According to this research, the Sprint Center contributed more than $213 million to the local economy in its first five years of operation. (3) When Green Day played at the Sprint Center on August 11, 2017, the guitar player pulled a young fan on to stage to sing along with the band.