In January, we found ourselves at the site of a highly touted Big 12 – SEC men’s basketball matchup, and in February we stay with a college basketball theme, moving to the site of the 246th (by our count at least) showdown between Duke University and the University of North Carolina (UNC), the Dean E. Smith Center in Chapel Hill, North Carolina, for this Pléiades 1 – SPOT 6/7 Stadium of the Month. 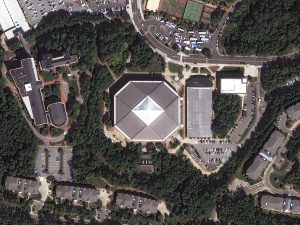 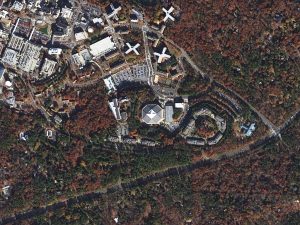 A 50-cm color image of the Dean Smith Center in Chapel Hill, North Carolina, USA collected on September 23, 2017 by Pléiades 1A; and then a 1.5-m SPOT 6 image of the same stadium collected on November 29, 2017! These images have custom processing and color balancing applied by Apollo Mapping. PLEIADES © CNES 2018, Distribution Airbus DS. SPOT © Airbus DS 2018.

Name & Its Origin: The idea for the Dean E. Smith Center, now often referred to as the Dean Dome, started in 1980 as a way to honor the legendary coach of the men’s basketball team of the UNC Tar Heels, who won 879 games while coaching from 1961 to 1997 at the university.

Location: The Dean Dome is located on the south-eastern portion of the UNC campus at about 380 feet (~115.8 meters) above sea level. UNC is situated in Chapel Hill, North Carolina which is a nearby western suburb of the Raleigh-Durham metro.

Stadium Capacity/Size, Architect & Build Date: During May 1980 the UNC Department of Athletics started fundraising to build the Dean Dome, raising some $35 million by 1984 from almost 2,400 donors. Designed by Middleton McMillan Architects, the arena took 43 months to finish, breaking ground on April 17, 1982; and then opening on January 18, 1986 to host a men’s basketball game (fittingly) between the #1 Tar Heels and the #3 Duke Blue Devils. Renovation plans for the nearly thirty year-old Dean Dome were put on hold again this year meaning the seating capacity will stay at 21,750 for the time being.

Key Sports Teams: The Dean E Smith Center is the home of the men’s and women’s basketball teams of the University of North Carolina Tar Heels and in 2017, the Dean Dome had the 4th highest average attendance of any Division I men’s team at 18,067 per game.

Most Popular Yearly Event: Besides the annual showdown between the Tar Heels and Blue Devils on the men’s side, the arena is used to host a variety of annual commencement and graduation activities as well as a plethora of concerts and speeches including Janet Jackson, Phil Collins, the Grateful Dead and even Barak Obama.

Fun Factoids: (1) On February 8, 2018, the Dean Dome will light up again for the first meeting of the Tar Heels’ and Blue Devils’ men’s basketball teams of the season, which will likely feature two top 25 Atlantic Coast Conference (ACC) squads. (2) The Dean Smith Center features 20,000 yards of rock mined from a ravine off nearby Mason Farm Road – and the site required 150,000 cubic feet of soil to be moved before construction of the arena began. (3) The Dean Dome is the fourth largest college basketball arena according to this list.