Anyone that wastes their time reading this column, well, I’m going to let you in on a secret about how I come with my ideas: usually I’m drunk, in a bad mood, or someone has aggravated me (near or far) and a phrase will get stuck in my head; that usually turns into the column’s topic. I simply take that phrase or word and put it in the title of the document, and it waits there until I’m good and ready to write it. Well, problem with that strategy is that sometimes I forget what the hell I meant when I assigned the title. Case in point this month. I must have been reading some book or article where the concept of “psychological ownership” came up and I liked it, or was troubled by it, or was baffled by it, or wanted to twist it all up and take it out of context. I’m sure had I written the column at the time it would have been half-decent (which equals my best). But since I no longer have a clue what my motives were, I’m left floating in the ether. Your guess is as good as mine. The thing is, every month what I’m writing about generates the same conclusion: your guess is as good as mine… So I’ll start afresh and take this down a different avenue. Probably not my original intention, but hey, your loss, not mine. 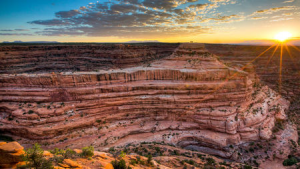 We all own this. Let’s make sure it stays that way.

I went to the source of all knowledge, Wikipedia, and looked up “psychological ownership.” It defined it as the feeling that something is yours even though it is clearly owned by someone else (your cubicle at work, for instance). So maybe I can salvage something after all, because this is actually pretty interesting. We all get attached to stuff, people, places, interactions, experiences and the like; it’s part of being a human. We all, also, take things for granted and assume that we have eminent domain over what we see as ours or as obstructing our path to our wants and needs. We’re a selfish species, a destructive one, a childish one, an apathetic one, and an aloof one. I’m actually surprised we’re not extinct yet. Don’t worry, we’ll get ourselves there soon enough. Press reset. I digress… For instance, there are some trails nearby that people both mountain bike and hike on. These two groups often are in conflict, yet each believes they are in the right. It may be because there are less trails open to bikers, or that they invest their own money in trail maintenance; or that hikers are less impactful of the environment because they typically don’t damage the flora or add to erosion problems as much as the bikers. Either way, each party has a sense of ownership over the trails, and while it would make sense to work together to have a more civil set of experiences, more often than not passive aggressiveness and/or outright rudeness occurs simply because one group views their rights trump the others’. The reality of the situation is the land belongs to us all, as we all pay taxes on it, but that doesn’t translate well, I guess. We all envision our perfect day out on the trail, and it rarely includes someone else out there slowing us down or whizzing by us, scaring the bejesus out of us. But that’s a basic, simple example. Let’s blow it up.

There is a current debate, that by the time this goes to press will likely still be contentious, about returning federal lands to the states. I have to provide some context here, and yes, another rabbit hole. Lucky you. I would say I was mostly aloof politically, only engaged (barely) at presidential election time for years (have I written about this before? I don’t know, these all blur together…). Then around late 2006 I stumbled on to Ron Paul and I thought he had some good ideas. I liked his limited government ideas, giving more power to the states, and less to the feds. I liked getting rid of the IRS and not taxing labor. I liked returning responsibility to the people: if you want to take drugs and sew your eyelids shut, it’s your body, no one should tell you otherwise. I liked his call to cease with military and political interventionism; we should take care of our problems at home first, and then help others when they ask for it. It all made sense, mostly. Paul had long been a card-carrying libertarian, with a failed presidential run in 1988 (and two more to follow in 2008 and 2012). He reenergized a lot of the disaffected and downtrodden; in some ways his last two campaigns gave way to the “populism” we saw in this last presidential cycle. So blame him, maybe… Anyhow, I was firmly in his camp for a good 3 years until I was forced to face some glaring inconsistencies in my thinking, namely that I couldn’t really be a true libertarian, even though I thought many of his ideas were sound, because of what I felt a nation should provide for its people to ensure its longevity and success: education and environment.

Thomas Jefferson is usually falsely given credit for the following quote (also to be found in the movie Waking Life): “A well-armed populace is the best defense against tyranny.” I have adapted it to fit my needs and stance: “A well-educated populace is the best defense against tyranny.” And hence, the first of my two imperative pillars of a solid union: education. To be fruitful and happy in the future, we all need to know how to live together and how to progress. We need to know our history, and we need to know our mistakes and the steps we took to overcome them. We need to be educated. The State needs to ensure that – and that everyone has equal access and equal opportunity to reach their potential through education. Otherwise, we simply do our nation a great disservice by putting out the flames of inspiration and inquiry before they can light the way.

Next, the environment. Quite simple, really: if we don’t have a natural world, we won’t have sustenance to survive. We will be forced to stay in our artificial, uninspiring, draining human-made spheres and will never be given the opportunity to refuel naturally. Great and beautiful species, when not cared for and preserved, will be eradicated and cause a chain reaction that ultimately leads to our downfall. We already have vanquished so many species, tortured so many others, that it is simply sad. But not enough people pay attention to the fact the natural world does quite fine at keeping itself in order. The less urban sprawl we create, the less we choose humans and buildings over beautiful and wide-open spaces, the better off we’ll be. But as I’ve said before, humans are stupid and greedy (myself included). We don’t think. We don’t think about consequences. We just act. In our own best interests.

So I can’t be a true libertarian because they don’t view the State as having any role in education or the environment, the two most important factors in any successful civilization. Libertarians only think the feds should deliver the mail and protect the border. That’s not enough for me. So I looked elsewhere, but I’m not certain I found what I’m looking for, at least in that regard. But back to my point: my “ownership” over the needs for providing a solid education, available to all, and the great need to protect the environment at all costs, suggests that I feel a sense of duty and right to take action as need be. Do I? No, not really. Certainly not enough. But these are two major issues that set me off when someone disagrees or acts in a way to usurp my sense of entitlement on the issues. So you take away Bears Ears and Grand Staircase to “return to the people,” well, that is a false statement. When something is protected for all people, federally, then that is really our best chance for everyone to have ownership, even if we squabble about bikes and hikes, ATVs and snowmobiles – at least we all can buy in and feel that we’re being heard. But when the lands are “returned” to the states, it isn’t so that the people who reside there can make the choices, it is so money interests and lobbyists can decide how to parcel it out, extract its resources, deface it, adulterate it, rape it, leave it barren, like the precursor to the nuclear war that will likely eventually wipe us all out. And likely good riddance.

That’s big picture psychological ownership. Small picture psychological ownership is what we as individuals will do about it. And how we’ll react when we’re denied. Will we be easily defeated, or will we dig in, bare our fangs and do whatever it takes? As I write this I sit outside in my backyard, thinking about what matters to me, and how I play a role in those twin pillars of a progressive society. I may not own the public schools, I may not own the USFS and state lands I recreate in, but I do own the experiences, and they do drive the spirit. If we want to have a say because we have a feeling, then that is the first step to investment. And everyone knows that once you invest, once you have bought in, once you have made your payments, fiscally or physically, you ultimately buy the product outright. You become an owner. Let’s take ownership of what’s ours, even if this wasn’t what I intended for this column to be from the outset…