Out of This World – Shrooms in Space

I’ve recently read two science fiction books where fungi played a significant role. In The Girl with All the Gifts, mycelia mutates and turns humans into zombie. Wanderers (spoiler!) has a fungus plague that wipes out most of humanity. I now view mushrooms with great suspicion. Researchers, however, are turning to the fungus to help us live in space, minus the zombies.

Check out this short video showing how mycelia could thrive in space. (Video Credit: NASA)

Space flight is inherently expensive. One way to reduce cost is to minimize the weight of space faring supplies, including building materials. Permanent structures are necessary for longer stays in space but traditional supplies are heavy. Researchers at NASA’s Ames Research Center in California have come up with mycelia building blocks. Mycelia is the part of fungus that branches out underground, spreading and absorbing nutrients. 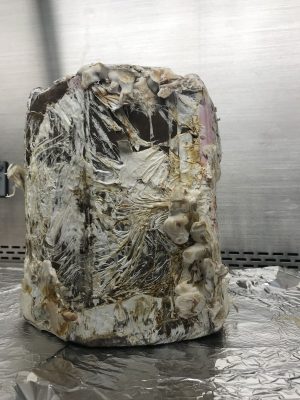 Tell me this isn’t a thing of science fiction nightmares, a block made of mycelia after two weeks of growth. (Photo Credit: 2018 Stanford-Brown-RISD iGEM Team)

Imagine a lightweight, compact structure that provides the basic framework for the building. Astronauts would lay it out and just add water. The fungi would grow around the framework, providing a solid structure. The blocks would be baked to solidify the structure and keep the fungi from spreading. There is some concern about the mycelia creeping out and wreaking havoc in alien environments, which leads me back to my original concern. To mitigate this fear, there would be an additional safeguard as the fungi would be genetically altered so it couldn’t live outside the structure.

Don’t worry, shrooms wouldn’t be your only protection from the harshness of space. The habitat would have a top layer of water and ice to deflect harmful radiation. The Moon and Mars both show evidence of frozen water, so it wouldn’t have to packed in. The water would maintain the layer of cyanobacteria underneath. Which in turn, would support the mycelia on the bottom layer. Cyanobacteria would use the water and sunlight to photosynthesize, creating oxygen for astronauts to breathe and nutrients for the mycelia.

Like all new technologies originally designed for space, there are implications for using them back on Earth. Construction is expensive and has a high environmental impact no matter what planet you’re on. These same researchers are experimenting with using mycelia to reclaim metals from e-waste recycling. The future is looking mighty shroomy, just watch out for zombies.