Out of This World – A Decade in Review 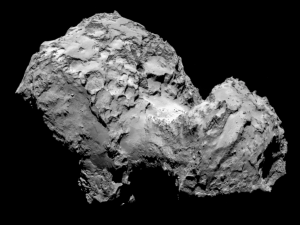 An image of Comet 67P/Churyumov-Gerasimenko where the Philae lander touched down. (Credit: ESA/Rosetta/MPS for OSIRIS Team MPS/UPD/LAM/IAA/SSO/INTA/UPM/DASP/IDA)

It’s the end of a decade, though there is some debate on what makes a decade. Let’s take a moment to reflect on the last decade of stellar discoveries. My favorite of all time is the first observation of gravitational waves using the Laser Interferometer Gravitational-Wave Observatory (LIGO). Theorized by Einstein, it took 100 years to detect these ripples in space-time created by the collision of two black holes millions of years ago, the echoes of which reached us in 2016. If that’s not the coolest thing ever then I don’t know what is.

Another mind blowing discovery was the detection of water vapor geysers on Europa, Jupiter’s moon. As Europa is gripped and squeezed by Jupiter’s gravity, water under thick layers of ice is ejected 200 kilometers from its south pole. The Europa Clipper spacecraft, set to launch in the next decade, will delve deeper into this mystery.

In another first, the Rosetta mission landed a spacecraft on the surface of a comet. No easy feat on a small object with very little gravity and a porous surface. The Philae lander unfortunately bounced into a shadow, making the solar arrays ineffective. It did send back its initial findings of an icy surface with organic molecules before it lost power. 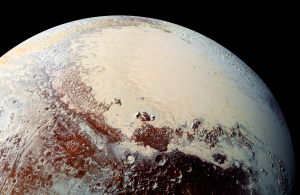 New Horizons captured this high-resolution image of Pluto on its flyby. (Credit: NASA/JHUAPL/SwRI)

New Horizons flew past Pluto sending back incredibly detailed images of the icy planet and its neighbor Charon. Scientists were surprised to find a relatively smooth surface, leading them to speculate that both objects may be more geologically active than they initially believed. After visiting Pluto, New Horizons ended the decade by imaging Arrokoth, a Kuiper Belt object that was once two objects that merged over time. Arrokoth is farthest object ever studied up close and a remnant of early planet formation.

In 2014, scientists took an image of the universe’s cosmic web. Much of space appears empty, but filaments of hydrogen gas stretch between galaxies, where matter is drawn together by gravity. This discovery gave researchers a better model to track dark matter since it mirrors regular matter. Looks like space isn’t as empty as it first appeared

This past decade brought sad goodbyes to missions that lived long after their initial life expectancy. The Kepler mission, that later transformed into K2, discovered 2,682 exoplanets before it ran out of fuel in 2018. It was succeeded by the Transiting Exoplanet Survey Satellite (TESS) in 2018, which has already discovered 28 exoplanets with 993 potential planets waiting confirmation. The Mars Opportunity rover lost contact in 2018 after fifteen years of cruising around the Martian surface and collecting important geological data. Mark Watney would be proud. We can only hope the next decade brings exciting new discoveries.