Free For All – February: A Look at an Iceless World 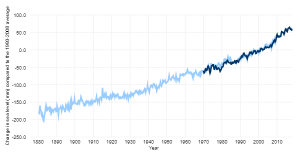 Ever wondered what the Earth would like if all the ice melted? Although it may seem like a far-fetched scenario, we are currently on the path to see a mean global sea-level rise of 1.6 feet (0.5 meters) this century, even with immediate emissions cuts (Nature Communications, 2019). In order to better understand the impacts of climate change and sea-level rise, I summarize some of the best websites and web mapping applications available in this Free For All.

This online article featured on National Geographic’s website, What the World Would Look Like if All the Ice Melted, is a great starting spot for our discussion. The article jumps 5,000 years into the future, which is estimated to be enough time with our current warming trends to melt all of Earth’s ice. This would be in accordance with a new Global average temperature of 80 degrees Fahrenheit (26.7 degrees Celsius), rather than our current average of about 58 degrees Fahrenheit (14.4 degrees Celsius). The result would be a SLR (sea-level rise) of 216 feet (68.3 meters), which would drastically change the geography of every continent. The article contains a series of visually-appealing images that show the new coastlines, as well as brief descriptions of the major changes to each continent. We could say goodbye to Florida, the Gulf Coast, most of Paraguay and all the Netherlands, just for starters. To better understand sea-level changes, you might visit NASA’s page dedicated entirely to SLR which provides information on the difference between global and regional SLR; as well as statistics, key contributors and indicators of change. If you are looking for scientific articles, check out this feature on Climate.gov, or this one recently published by Nature. 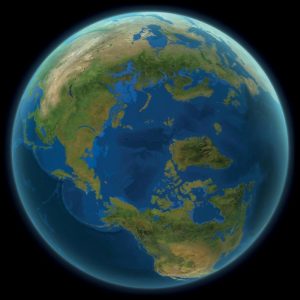 Interactive web maps can help visualize SLR, and these free sites focus on changes to the United States’ coastline. The first is the Sea Level Rise Viewer, which uses elevation data to display topographic changes along the coastline. By changing values on a slider from the current level to as high as 10 feet (3 meters) above high tide, users can see which coastal areas will be impacted. This web map also includes specific local scenarios which allow users to change emissions levels as well as look at sea level changes over time (see the third image here). The Sea Level Rise Viewer also models wetland migration, human vulnerability and high-tide flooding.

Another interesting web mapping application is the Eustatic Sea Level model, provided by NASA’s Virtual Earth System Laboratory. The web map allows you to choose between Florida, the Gulf Coast and California, and then displays the chosen region as a 3D model. From there, you control which basins with ice will melt, as well as the percentage that melts. As you slide the bar to melt ice, you can see both a 3D model of it disappearing from the basin, as well as subsequent changes to the region’s coastline.

Sea-level rise is one of the most pressing issues resulting from climate change, and unfortunately, those who are the most affected are often the least responsible. It is our duty as functioning members of society to be educated and aware of the gravity of this situation, that way we can do our best to combat Climate Change in our daily lives. Since carbon dioxide emissions are a primary contributor to Climate Change, I would highly recommend checking out our article on carbon footprint calculators as your next step.