We here at Apollo Mapping are always on the lookout for maps and mapping projects that we think deserve to be noticed. That, after all, is precisely the reason we’ve been doing this monthly column for so darn long (and because we love maps, did I mention we love maps?). Now normally we lean towards highlighting one particular map or effort, but this month we’re showcasing a whole group of maps! That’s right, why have one when you can have many? Georgia State University and Emory University seem to agree, because their platform ATLMaps has tons of stuff on it waiting to be explored. Let’s dive in! 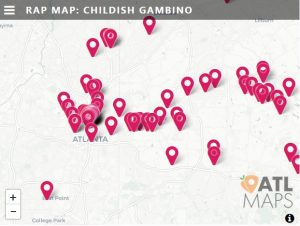 A screenshot of Georgia State’s Adnan Rasool’s “Rap Map” over Atlanta, GA within the ATLMaps platform.

The ATLMaps platform combines “archival maps, geospatial data visualization, and user contributed multimedia location pinpoints to promote investigation into any number of issues about Atlanta”. A central focus on the projects efforts is the incorporation of personal experience into the maps:

The project looks to offer a framework that incorporates storytelling reliant on geospatial data and for normalizing input across a range of data sets about so that material can be cross-compared in novel ways, allowing users to make connections between seemingly unrelated data sources and ask questions that would not be apparent when only looking at one particular project. The ATLMaps project will also encourage knowledgeable members of the university and local communities to curate data on the site to demonstrate the possibilities for synthesizing material across projects and data types.

While there a wide variety of projects on the site, one of the best (and perhaps coolest??) examples of this intersection of storytelling and cartography comes from Adnan Rasool, a Pakastani immigrant who says that while living in London he was able to “learn a lot about Atlanta, and America by extension, by listening to the legendary Atlanta rap group Outkast”. He goes on to stress that it was Outkast that opened his eyes to American culture:

“Outkast helped me understand that there was more to America than the movies and TV shows,” says that student, Adnan Rasool. “There was a whole side that I didn’t know and the music and videos helped explain that. For me, Atlanta was this place where you could make it no matter who you were.”

Rasool was so captivated by the group’s music that he in fact moved to Atlanta, where as a PhD candidate at Georgia State’s political science department he’s contributed his own map to the ATL project, walking users through the city using lyrics from artists such as Outkast, Childish Gambino and Ludacris! Points on the map detail locations referenced in the songs of these artist, such as the Childish Gambino’s Rap Map pictured above. We definitely encourage you to head over to atlmaps.org to see more!