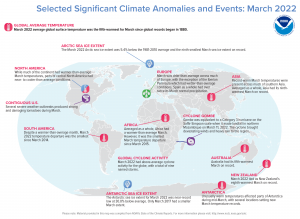 The NOAA extreme weather events map for March 2022 shows the ninth-smallest Artic Ice extent for the month on record and then the second smallest extent in the Antarctic Sea; while it was the fifth-warmest March in Australia and the eighth-warmest in New Zealand.