Out of This World – Satellite Smog

Standing outside on a crisp spring night, surrounded by chirping grasshoppers and the low hum of the nearby highway, I turn my gaze to the stars and it’s as easy as breathing. Denver’s smog and the haze from wildfires clouds the space between us, but I can still follow the outline of Orion as he’s chased around the night sky by Ursa Major and Ursa Minor — a modern retelling. 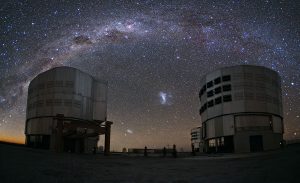 The Emu in the Sky constellation over Cerro Paranal above the Atacama Desert in Chile (Credit: ESO/Y. Beletsky)

As I connect the dots, unwittingly tracing our history back in time to the present. On the opposite side of the world, someone will step outside when night falls and stare into their collective past and current culture. Pollution, including light pollution, has already blotted out the night sky in certain metropolitan areas, telling a story of its own, but there’s another growing threat to our celestial view: satellites.

Karlie Noon, an Australian National University Astronomer, wrote about satellites as an increasing risk to the natural world and natural history, especially to the aboriginal cultures of Australia. Important traditions and histories are intertwined with the natural world and routinely desecrated in favor of special interest with deep pockets. The Gamilaraay and Wiradjuri peoples of New South Wales traditionally use the Emu in the Sky constellation to define the hunting season for emu eggs. It’s a dark constellation, defined by its large swaths of starless sky and it could disappear as satellite pollution turns up a few notches in the next decade.

Aerospace companies toss ‘SmallSats’ into space by the dozens. If the world’s billionaires get their way, there will be 30,000 Starlink satellites, 3,000 Amazon satellites, and 6,000 satellites from OneWeb, an English company, in the next decade. These satellites often orbit at lower altitudes, dispersing sunlight and leaving behind a visible streak like a comet tail, sometimes up to 19 at one time. Currently, there’s only a fraction of the total planned satellites in orbit. Once the mega-constellations launch, there’s likely to be a noticeable increase in natural skyglow. Faint stars will fade, and once dark patches of sky will never be the same.

The unimpeded expansion of commercial interest into space is a disaster most people are happy to ignore. According to an article in Discover Magazine, the Outer Space Treaty signed in 1967 was crafted when governments were the only entities capable of launching satellites and didn’t foresee the future of commercialized space and so it has nothing to say on the matter. The Federal Communication Commission (FCC) needs to sign off on the launch, but they don’t take the National Environmental Protection Act (NEPA) into consideration during the process. Cultural preservation and environmental risk should be important factors in decisions made by the federal government in pursuit of commercial interests.

Indigenous groups are fighting on all fronts to stop the colonizing and erasure of their culture while the stars that used to guide us all fade. It’s just more collateral damage for the sake of the bottom line. Everyone should be able to see through the Earth’s atmosphere to the stars surrounding us on all sides. Policy changes are necessary in every country to preserve the sky we take for granted.