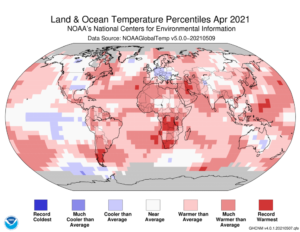 Some 2.44% of the world saw record temperatures during April 2021 with most of these records found in Africa, the Middle East and South America. Pockets of cooler weather were found over central Europe, southern United States and southeastern Australia.