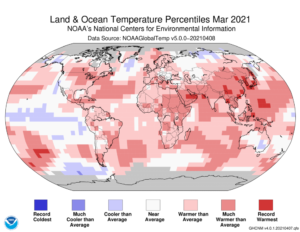 The March 2021 temperature departure map has a whole lot of red but not the deep reds for record temperatures we are used to seeing across the planet. Some record warmth can be seen in central and eastern Asia while there were cooler temperatures in Alaska, Australia and northern Asia.